Chief of the Antimemetics Division (formerly)

Firearm Skills
Strong Will
With Mnestics

As an informational ghost

Murata (村田) is a recurring character of the 2016-2020 fantasy horror manga series Demon Slayer: Kimetsu no Yaiba and its 2019 anime adaptation.

He is a Demon hunter who has mundane combat abilities with nothing unique or extraordinary while Giyu Tomioka, who is revealed to be Murata's fellow student, possessed immense fighting talents to be promoted into becoming a Pillar - the rank in the corps equivalent to warlords. In addition Tanjiro and his friends, who entered the world of Demon hunting much later and therefore are deemed juniors to Murata, also possessed innate fighting skills to slay Demons in their own unique ways. In his 8 years of service in the corps he is still average field agent.

In spite of his mediocrity, Murata is a seasoned and hardened veteran Demon hunter who manages to survive 8 years in his service to Demon Slayer Corps while other field agents perish in large numbers against vicious Demons, and is one of very few corps soldiers who survives to witness the outcome of human-Demon War that raged on for a millennium.

He is voiced by Kōki Miyata in Japanese and Khoi Dao in English.

Murata is a young boy who has straight jet-black hair parted down on the middle and similarly colored eyes. He lubricates his hair with oils because a girl he had a crush with liked his hair that way prior to him joining the corps.

Murata is sociable, easy to befriend with and has strong camaraderie. In spite of huge difference in powers Murata feels no enmity towards Tanjiro's team and treats Tanjiro, Giyu and other junior agents as any role model seniors would and should, offering them some advice as best as he could (such as advising Zenitsu who had a tough time conditioning his body in a very cold water, to hold onto rock to warm himself during a trial given by the Rock Pillar).

Murata's family was destroyed by demons, so he had no friends left. By entering the Demon Slayer Corps, he became a Demon Slayer. He was like Sabito and Giyu Tomioka in the same Final Collection. He appears, however, to have many variations in him. 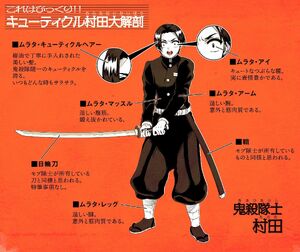 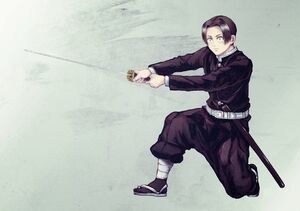 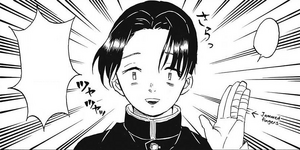 Murata in the Manga 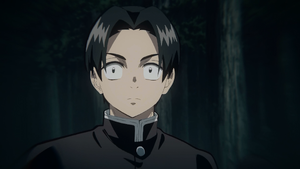