To take good care of Courage and Eustace.

Muriel Bagge is the deuteragonist of the Cartoon Network series, Courage the Cowardly Dog. She is a kind owner of Courage the dog, whom she found in the back alley of the vet, as it is hinted in The Remembance of Courage Past. She's also married to Eustace Bagge, a stubborn and greedy farmer, and lives in Nowhere, Kansas.

Muriel is an elderly woman with a Scottish accent and wears glasses that never show her eyes. She is a very kind-hearted individual and she often shows courtesy towards everyone, but can also be very clueless about the creepy events of nowhere, and half of the time never realizes the danger she faces. When she does, she usually yells for help, and Courage (and sometimes Eustace) come to save her. In several occasions, Muriel carries her trademark rolling pin to whack Eustace on the head whenever he scares, teases, abuses or otherwise mistreats Courage in which he always says "Ow!! What did I do?! What did I do?!". Additionally, it is revealed that she is a very good cook, as she won many cooking awards which included: best dog food, best eggplants and best toffee apples.

Eustace is also cold to his wife, despite her kindness to him, but shows his genuine love for her and is jealous of the attention she gives to Courage. However, in one time, she successfully saved herself from a deadly spider and smacked Katz with a tennis racket to save Courage, as hinted in The Night of Katz Motel.

She has white curls, wears an olive colored dress, a yellow apron, a pair of sturdy, black leather boots, and just like her husband, Eustace, glasses. Her usual facial expression is extremely cheerful and happy. 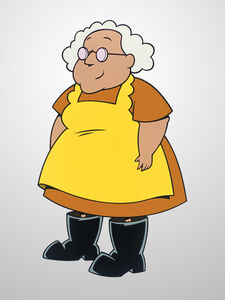 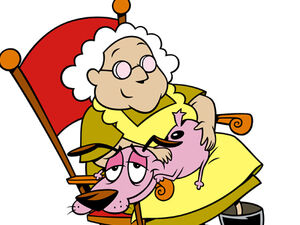 Muriel holding Courage in her lap, while in her rocking chair. 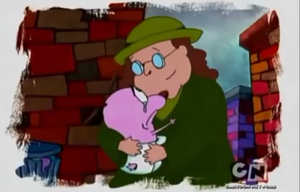 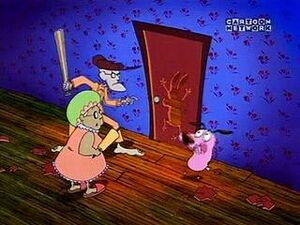 Muriel sees the door all mess up

Add a photo to this gallery
Retrieved from "https://hero.fandom.com/wiki/Muriel_Bagge?oldid=1486696"
Community content is available under CC-BY-SA unless otherwise noted.