To keep children from having fun

Ms. Muriel P. Finster is the assistant teacher from the TV show, Recess. Like Prickly, she is sometimes good or neutral. She is in charge of lunch, recess and detention tasks.

She is also TJ's fifth grade teacher starting in Recess: Taking the Fifth Grade after the original and desired Miss Milkie had consigned out to another school.

She sometimes has a major role in the series and Recess: School's Out. In that movie, she serves as the tritagonist.

She was voiced by April Winchell also voices Sylvia and Terk.

She usually serves as the constant nemesis of the child protagonist. Although Ms. Finster is technically a teacher and enforcer of discipline rather than a true villain, she is nevertheless shown to be a control-freak and sometimes even downright malevolent: though it could be argued her malvolence is played upon more due to children generally disliking authoritative figures.

She is also best friends with the current principal, Principal Peter Prickly.

Ms. Finster is however quite open in her views that children should be treated fairly harshly and views most children as little more than "hooligans".

She even employs Randal C. Weems as her eyes and ears on the playground: rewarding him with cookies and other such perks for being what the other children refer to as a "snitch".

Despite being fairly old, Ms. Finster is a formidable fighter. Of course, she never utilizes these techniques on any of the children, but she has been seen using them against the villains in "Recess: School's Out" (in which she serves as the tritagonist), as well as for purely recreational use: she seems to be especially skilled at boxing.

Ms. Finster was not always the overbearing authoritarian she is today, when she was younger she was a good-natured teacher and well-liked by her students.

However something happened in her past that changed her into the bullying tyrant she is today. Despite her usual antagonistic role, she has had moments of being more of a friend and has appeared as a hero (or at least benefactor) on rare occasions, suggesting that deep inside Ms. Finster is still a caring individual.

She also is willing to defend any children from harm's way as she's seen in one episode defending one of the child protagonists, T.J. Detweiler from an evil school adminstrator named Dr. Slicer who's punishing T.J. by naming him 'Captain Sappy' for getting into Principal Pricky's way, despite Finster stating the fact that T.J. was actually expressing the whole school's true feelings for Prickly.

In the film, she even aided the students and the rest of the staff in stopping her ex-boyfriend Dr. Phillium Benedict from sending the Earth to a new Ice Age as a part of his plan to raise test scores and become president of the United States. 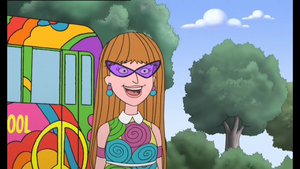 Retrieved from "https://hero.fandom.com/wiki/Muriel_Finster?oldid=1899498"
Community content is available under CC-BY-SA unless otherwise noted.