Murray, the brawn, is the tritagonist of the Sly Cooper series. He is a

hippopotamus with pink skin and brown eyes. He is best friends with Sly Cooper and Bentley, and is a member of t he Cooper Gang. He has a great love for his Van, which he drives when the gang needs a quick getaway.

of 18. His current age is unknown as he was 20 in Sly 2: Band of Thieves, 21 in Sly 3: Honor Among Thieves, but an unknown amount of time passed between that and the fourth game. His demeanor changed drastically between the first and second games, going from a timid getaway driver, to someone much more fearless, often throwing himself into dangerous situations just for the thrill of it. 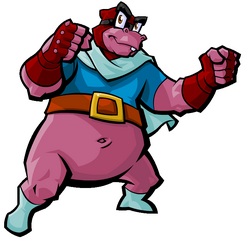 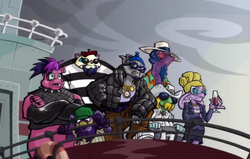 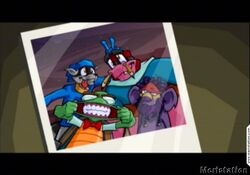 Add a photo to this gallery
Retrieved from "https://hero.fandom.com/wiki/Murray_(Sly_Cooper)?oldid=1091669"
Community content is available under CC-BY-SA unless otherwise noted.