Goddess of the Arts

The Muses are the storytellers from Disney's Hercules. They are presented as the five lovely Goddesses whose domain lies in the arts, and they sing the tales of ancient Greece in a 'gospel choir' style. They claim to be Hercules' biggest fans, narrating the movie and singing in four of the six songs. Their real names are Calliope, Clio, Thalia, Terpsichore and Melpomene.

Calliope is the muse of epic poetry. She leads the muses and is the tallest of the five with high hair. She is voiced by Lillias White.

Clio is the muse of history. She has a small ponytail and carries a scroll. She is voiced by Vaneese Y. Williams.

Thalia is the muse of comedy. She is the shortest of the five, and very round in shape. She is voiced by Roz Ryan.

Terpsichore is the muse of dance. She is the second-shortest of the five, with frizzy hair. She is voiced by LaChanze. She is the only muse that has ever come in contact with Hercules teaching him how to dance in Hercules and the Muse of Dance.

Melpomene is the muse of tragedy. She has long, curly hair to her waist. She is voiced by Cheryl Freeman. ____

Muses not shown in the Hercules film are, Erato - muse of love ballads, Polyhymia - muse of hymns, Euterpe - muse of singing and Urania - Muse of astrology. 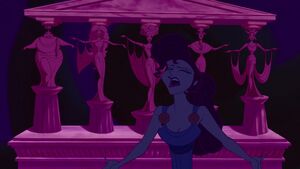 The Muses encouraging Meg to say she's in love. 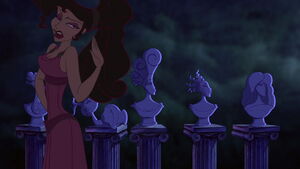