Mutsu (陸奥?) is a character and one of the heroes from the Kantai Collection series who was implemented into the game on the 23rd of April, 2013.

Alongside her sister ships USS Maryland, USS West Virginia, Nagato, Colorado, Nelson and HMS Rodney, she is one of the Big Seven.

She is voiced by Sakura Ayane and drawn by Shizuma Yoshinori.

Mutsu, named after Mutsu Province, was a dreadnought battleship built for the Imperial Japanese Navy (IJN) at the end of World War I. She was the second ship of the Nagato class. In 1923, a year after commissioning, she carried supplies for the survivors of the Great Kantō earthquake. The ship was modernized in 1934–36 with improvements to her armor and machinery, and a rebuilt superstructure in the pagoda mast style.

Other than participating in the Battle of Midway and the Battle of the Eastern Solomons in 1942, where she did not see any significant combat, Mutsu spent most of the first year of the Pacific War in training. She returned to Japan in early 1943. That June, one of her aft magazines detonated while she was at anchor, sinking the ship with the loss of 1,121 of the 1,474 crew and visitors. The majority of the casualties died not from drowning, but from the explosion.

The IJN conducted a perfunctory investigation into the cause of her loss and concluded that it was not of natural causes. Due to the deaths of most of the people on the ship, however, while many possible causes were raised, to this day the real cause of the explosion is not yet known.

The navy dispersed the survivors in an attempt to conceal the sinking in the interest of morale in Japan, continuing even to pay the salaries of the dead men. Much of the wreck was salvaged after the war and many artifacts and relics are on display in Japan.

She has short brown hair, green eyes and large breasts. She normally is seen wearing a headband with two gun turrets, a miniskirt and a top that bares her midriff.

Infamous for once having the lowest luck in the game (3, 5 when upgraded), stemming from her historical demise (She essentially blew herself in half while at home).

Mutsu has a demure and ladylike personality that contrasts wildly with her role as a front-line battleship.

In the anime, instead of being a front-line Battleship, she instead serves as the assistant of her sister Nagato, making her the secretary of the Admiral's secretary. 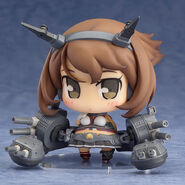 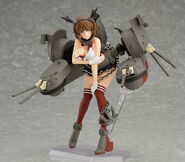 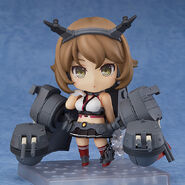 Add a photo to this gallery
Retrieved from "https://hero.fandom.com/wiki/Mutsu?oldid=1776175"
Community content is available under CC-BY-SA unless otherwise noted.