Mutsuki (睦月 ”January”?) was the lead ship of twelve Mutsuki-class destroyers, built for the Imperial Japanese Navy following World War I. Advanced for their time, these ships served as first-line destroyers through the 1930s, but were considered obsolescent by the start of the Pacific War.

Visually, she is notable for having short brown or red hair with a slight gradient (appearing brown up top and a brighter red at the bottom) that may or may not be played up by artists. She wears a serafuku with a white shirt that has a green collar, and a green skirt, and wears pantyhose.

With her combat gear, she wears a backpack-like smokestack and mast, a pair of torpedo launchers on her outer thighs, and carries a single-cannon turret with a handle on its bottom. Her "shoes" in this case are mechanical, but appear to be normal school-style loafers besides that, without a keel or other odd adjustments.

For the 2nd anniversary of Kantai Collection, she, along with Kisaragi, gained a second remodel. They now feature a dark blue jacket with their names (+ Kai Ni) on the sleeves and a crescent moon pin on both the jacket (both at the same place) and the serafuku, now with a red scarf. On their rigging is a flower, like Uzuki and Yayoi, bridging the later design with the earlier one. They also come with a 12.7 cm HA Twin gun along with their standard 12 cm single gun. This remodel is noted to be completely fictive, however, Mutsuki having sunk relatively early in the war. Mutsuki herself has the crescent moon pin on her serafuku scarf. Her flower is a camellia, flower of her namesake month.

She is a cheerful, childish girl who wants the Admiral's approval. Mutsuki herself is a hyperactive and upbeat girl. Other than this, she has no real memes (as of yet). She was a relatively unpopular character until she appeared in the official anime as part of a trio with Fubuki and Yuudachi which gave her a popularity boost. 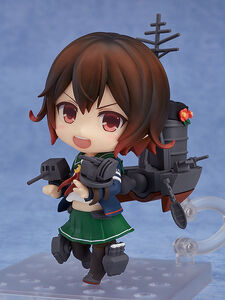 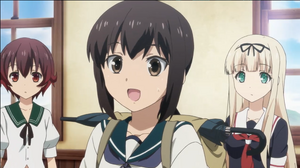 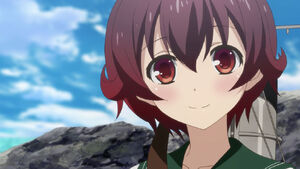 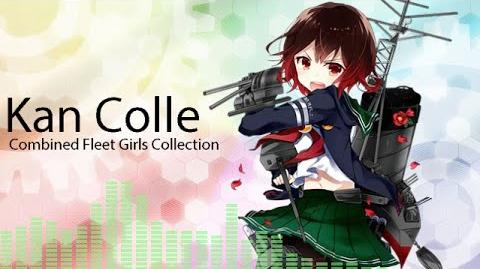