Heroes Wiki
Register
Don't have an account?
Sign In
Advertisement
in: Spoilers, League of Legends Heroes, Teenagers,
and 11 more

Mylo is major character of the Riot Games/Netflix 2021 animated series Arcane. He is one of Vander Vander's adoptive children, as well as adoptive brother of Vi and Powder/Jinx. He was a Zaunite orphan just like Vi and Powder and was taken in by Vander who is the de-facto leader of the Lanes in the undercity.

He was voiced by Yuri Lowenthal who also voices Sasuke Uchiha in in Naruto, Ben Tennyson in Ben 10,Simon in Gurren Lagann and Suzaku Kururugi in Code Geass.

Mylo was bold and determined, yet obnoxious. He frequently criticized Powder for her clumsiness and often called her a jinx, yet was blind to his own flaws as during the heist he stirred up conflict within the group when they needed to focus and unwittingly told Deckard about what he stole leading to them getting beaten up, which Vi later called him out on. In spite of his flaws, Mylo was willing to join his siblings to rescue Vander after hearing that he was kidnapped by Silco's forces, since he was just as much of a father to him as the others.

Not much is known about Mylo's early life. It is presumed that he lost his parents during a Zaunite uprising and was adoptive by Vander.

Together with Vi and Claggor, Mylo sometimes went on jobs for Vander, the children eager to prove themselves and be treated like adults. Mylo often made the younger orphan Powder the target of his irritation, often calling her a jinx for foiling their jobs.

During one particular trip to Piltover to rob a workshop on Ekko's tip, Powder accidentally caused an explosion that caught the attention of the enforcers, thus initiating a manhunt for the culprits. With their descriptions closely matching their ragtag group, Vander asked them to lay low, but still found themselves almost getting caught several times. Vi tried to surrender herself in their stead, only to be stopped by Vander who was taken by Silco before he could be taken back to the upper city. When Vi told them, Mylo and Claggor insisted on accompanying him.

Once at Silco's Shimmer factory, Mylo broke the locks on Vander's bindings while Vi faced off against Silko's goons and Claggor made an escape route for them. Before they could escape however, Powder causes an explosion with the stolen magic crystals, killing him and Claggor in the ensuing collapse

By Ekko's instructions, Mylo would be immortalized on a mural inside the Firelights base. His likeness was painted next to his adopted siblings and father. Jinx, haunted by her actions, would keep a life-sized doll of Mylo in her room, pretending that he was still around, tormenting her. 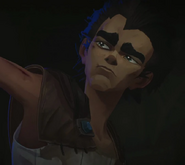