Hero from the past

Myriam is a minor protagonist in the Dragalia Lost. She is the woman whom Mym bases her human form off of.

Myriam has long crimson hair and yellow eyes. She wears a white and aqua hat, and she dons similarly colored outer garments.

Myriam's weapon of choice is a magical staff. She uses Adoring Blow and Blast of Emotion as her skills.

A woman who fought the Dyrenell Empire three hundred years ago at Alberius's side. Though she holds a quiet disposition, she exudes warmth and care, and an unrivaled love for Alberius. She's also the model for Brunhilda's human form.

When she first met Alberius, she was being harassed by a few guards over a weapon called Dragalia until he came to the rescue. When Alberius unsheathed the sword, that's when Myriam realized that he was the dragonblood hero she had been looking for and brings him to the church. Upon which, the two of them are tasked to meet Elysium to get the great dragon's blessing.

After Alberius proves himself to Elysium, he, Myriam, and Midgardsormr all deal with some Dyrenell soldiers. Unknown to them, Myriam's father was working for Dyrenell until Morsayati was released. Upon witnessing her father get possessed by Morsayati, Myriam and Alberius prepare to seek Elysium for help.

However, Elysium sends hoards of dragons to lay waste to humans and fiends, prompting Alberius to face the dragon while Myriam leads to people to safety.

After Alberius quells Elysium and convinces the dragon to let humans live, Myriam helps Alberius fight the Dyrenell empire up until she takes a fatal blow protecting Alberius. 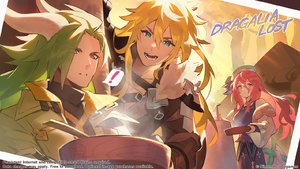