Mythra is one of the main deuteragonists in Xenoblade Chronicles 2. She is a Blade that can support her driver Rex. She is also another form of Pyra. She also serves as Pyra's best friend.

She was voiced by Shino Shimoji in the Japanese version and Skye Bennett in the English version.

After Malos parted ways with Amalthus, Amalthus searched Alrest for another Driver to awaken the other Aegis. Addam, the Kingdom of Torna, awakened Mythra and became her Driver at Olethro Playhouse. They then traveled through Torna and became allies with Lora, Jin, and Hugo.

Mythra battled Malos multiple times during the Aegis War and even piloted Siren against him. Eventually, Addam and Mythra emerged victoriously, but the war leads to the deaths of three Titans. Addam and Mythra then agreed to seal away her power; she created her alter-ego and sister Pyra, and Addam sealed her on board a Tornan ship, which he sunk beneath the Cloud Sea.

500 years later, the new organization of Torna brings up the Tornan ship in hopes of capturing Pyra. A salvager Rex ends up becoming the new Driver of the Aegis and promises to take Pyra to Elysium. Pyra, however, abstains from using Mythra's power out of fear of more destruction. After Vandham's death at the hands of Malos and Akhos, Mythra reawakens and uses Siren's power to quickly defeat the two. She then continues to travel with Rex, who can now switch between the two during battle.

Mythra is a downloadable playable character in Super Smash Bros. Ultimate alongside Pyra and was released on March 4, 2021.

Mythra is essentially the same body as Pyra, the only differences being her long-blonde hair with two outer strands on each of her sides pointing upwards, golden eyes, clothing type and color.

She wears a tiara with two wings pointing inwards on the sides with an emerald green/black gem, two tiny emerald gem earrings, and a white-green extremely short dress. Alongside underneath is a leotard.

Her core crystal, located on her chest, is an emerald green color bearing a striking resemblance to the Conduit, with a missing portion shaped like an X in the middle. The X coming from Rex and her being linked after Pyra shared her life force with Rex and they bonded. The X portion is fused to Rex's chest.

Mythra's outfit consists of the colors white, gold, emerald green and black, being primarily white. Mythra has emerald green energy lines along her body that glow in the dark, two of these lines are in the shape of two crosses, located on her chest, differing from the single X located on Pyra's chest.

Mythra also has a green emerald gem strapped to her right thigh, white fingered gloves that cover most of her arms with large emerald gems at the end, two belt-like fabrics on the sides of her hips, along a cape that resembles two scarves connected to her back. Her shoes each have two golden spikes protruding from the front to the sides of her calves.

In the Challenge DLC, Mythra gains a bikini.

In Super Smash Ulitmate, she wears long black stockings and her cleavage covered up.

Mythra is a light element blade for her driver Rex. She wields the aegis blade as her weapon and control the power of light to slay her foes down. She can also transform into Pyra which is similar to how Zelda transforms into Sheik. 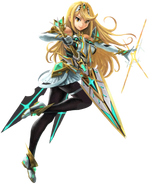 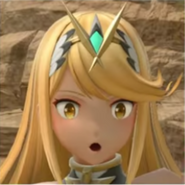