Heroes Wiki
Register
Don't have an account?
Sign In
Advertisement
in: Article stubs, Female, The Legend of Zelda Heroes,
and 34 more

Leader of the Gerudo Thieves
Sage of Spirit

Assist Link and Zelda as a sage (succeeded).

Friend of a Villain
False Antagonist

Nabooru is the leader of the Gerudo theives, Ganondorf's ex-henchwoman and one of Hyrules seven sages. She first appears in the video game The Legend of Zelda: Ocarina of Time.

She is voiced by Yayoi Jinguji.

As a child Link entered the Spirit Temple and met a nice Gerudo named Nabooru who used to be the servant of Ganondorf who is looking for the Silver Gauntlets. After Link obtained the Silver Gauntlets which won't fit him unless he's an adult, Nabooru was encircled by two witches who are Ganondorf's nannies and servants named Koume and Kotake who guards the Spirit Temple. Seven years later, as Link battles his way to the Boss room, he encountered a large Iron Knuckle who was actually Nabooru who was possesed by Koume and Kotake. After a Boss battle, Nabooru awakens as the Sage of Spirit and gives Link the Spirit Medallion.

The Legend of Zelda: Wind Waker

A stain glass window of Nabooru can seen in Hyrule Castle where the Master Sword is kept. 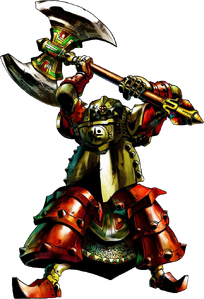 Nabooru as an Iron Knuckle. 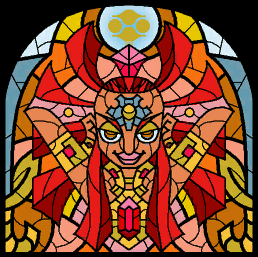 Urbosa's Divine Beast Vah Naboris in The Legend of Zelda: Breath of the Wild is named after Nabooru, since she was responsible for the Gerudo's reformation from being a reclusive gang of thieves, to being more involved in foreign trade with the other races across Hyrule.