Nabu is a character from the Winx Club series. His first appearance was in "A Trap for Fairies". He was Aisha's love interest, and later fiancé.

In Season 3 and a part of Season 4, He wears a tracksuit in purple colors with yellow stripes, with a neckline beneath his trousers, a red shirt and white shoes. In Season 4, he wears a white shirt inside and a purple and dark blue shirt with buttons, beige pants and white sneakers.

He wears a red robe with yellow edges and the same shoes has his civilian clothes.

Nabu is a wizard from Andros. He was from richest family of Andros. and had an isolated childhood similar to Aisha's. Because he had no friends to play with, he spent most of his time learning battle tricks from his security guards. In addition, he has studied many different magic spells on Andros, thus his prodigious skills in spell-casting.

When a marriage was arranged between him and Aisha, he initially did not want to marry her and ran away from home. Later, he decided he wanted to find out what Aisha was really like, and so began to secretly keep an eye on the Winx girls for a while. He appeared as Ophir first, then told Aisha his real name at the end of the episode, The Wizard's Challenge.

After clearing up some misunderstandings with Riven and showing him some battle moves, Riven inquired Nabu about these techniques. Nabu tells him that as a child, he had grown up on an island and there was no one his age and therefore lacked friends. For companionship he turned to the security guards there, spent time with them and learned all of their tricks. Though it was a time of loneliness which was similar to Aisha's childhood.

He later returns in Episode 18, where he listens to a conversation between the Winx girls until Stella reveals his hiding spot. Later in the episode, he decides to offer the Winx his assistance in fighting Valtor, who plans to steal a magical item at the museum. Nabu does not want to reveal who he really is, so he tells the Winx that his name is Ophir. The Winx let him come along on the mission, even though they are Nabu's Parents not sure if they can trust him. However, when Valtor threatens Aisha, Nabu gets in the way and is captured by Valtor. The Winx are forced to give Valtor the magic box he came to steal in order to save Nabu.

Later, when the Winx went to the Golden Kingdom to obtain the Water Stars, Nabu was a stow away on their ship. Aisha discovered him, and since the group were not sure if they could trust him or not due to their previous encounter, they put shackles on him. During the mission, Nabu and Aisha get to know each other a little better. Nabu helped the Winx fight off the guards of the Red Tower, and was the only one who did not get knocked out. Riven showed up shortly afterwards, and he and Nabu get into a fight due to Riven misinterpreting the situation and mistakenly believing that Nabu was trying to steal Musa from him. Sky and Timmy break up the fight, and the misunderstanding is cleared up. When the Trix later attack the group while the Winx (except Bloom) are inside the Crystal Labyrinth, Nabu at one point easily defeats Darcy.

After having obtained the Water Stars, the Winx invited their boyfriends to a dance club and Aisha asked Nabu to come along. However, Nabu was forced to leave when his security guards showed up to bring him home. When he meets with Aisha again near the end of the episode, he explains the situation and finally reveals his true identity. He tells Aisha that he has fallen in love with her, and apologizes for lying to her. Aisha and Nabu meet each others' parents, who have realized that they should not have tried to make their kids follow a tradition that went against their wishes. However, they are also pleased that destiny brought them together anyway, but decide that a marriage can wait. The episode ends with the Winx welcoming Nabu into the club.

In Episode 25, Nabu only has a short cameo appearance at the end.

After the battle is over, and everyone is celebrating at Lake Roccaluce, Nabu and Aisha are shown having their first kiss.

In this season, he proposes to Aisha, which she accepts despite the two already being engaged in an arranged marriage by their parents.

When he and the Specialists show up to help the girls fight the Wizards of the Black Circle in Episode 7, it is Nabu who saves Roxy from being absorbed by the Black Circle using his magic. However, during the fight, Nabu's magic is useless against Ogron.

When Diana shows up in Episode 18, Nabu recognizes the sleep inducing pollen she uses to knock out the people in the Frutti Music Bar, and tells the Specialists to hold their breaths for as long as they can. Once Diana has left, Nabu uses his magic to weaken the magical roots she used to tie up the Winx, allowing them to regain their strength and transform. Nabu and the Specialists go to the Gardenia park to confront Diana, but Diana easily takes out most of the Specialists, only Nabu being able to put up a fight due to him being the only one with magical powers. Nabu manages to resist Diana's attacks, but is unable to do anything but watch as Diana and the Amazon Fairies kidnap the Specialists and take them away to Diana's kingdom.

When the Winx show up, he is clearly worn out from the fight against Diana, and informs them of what happened. Nabu apologizes for letting the Amazon Fairies take the Specialists away, and admits that he is not as powerful as a Major Fairy such as Diana.

When the Ethereal Fairies appear in the next episode, Nabu seems to recognize their powerful magic and comments on how awesome it is. He joins the Winx as they go to the Amazons to rescue the Specialists. When the Amazon Fairies show up, Nabu asks the Winx to distract them while he goes off to Diana's castle to save the Specialists. It is unclear what exactly happened to him while he was searching for the Specialists, but he was somehow injured and captured by the Amazon fairies.

At the beginning of the next episode, Aisha is clearly concerned about Nabu as his condition seems to be worse than the others, and demands to know what Diana did to him. Diana simply chains Nabu and the Specialists to the wall, and orders the jungle itself to help capture Bloom, Stella and Tecna who had gone off to search for the source of Diana's power.

After they have been captured, and Bloom awakens Sky expresses concern for Nabu as he was the only one who had not yet regained consciousness at that point. Bloom and the other fairies quickly combine their Sophix powers to break the chains, and Bloom uses her powers to heal Nabu. When the Amazon Fairies return, Nabu uses an illusion spell to distract them while the Winx knock out the Amazon Fairies, allowing them all to escape the castle.

In Episode 24, he makes an attempt to cure Duman's illness after Sibylla's fairies had failed. He realized that the reason they were unable to do anything, was because they did not know what the cause was. He soon finds out that the cause of the illness was that Duman's magical energy had gotten unstable. However, soon after this discovery, Duman transforms into a monster and attacks the other specialists, and ends up capturing Nabu. Riven ends up chasing down Duman, and manages to save Nabu.

The Specialists end up having to fight Duman, who blurts out Ogron's plan to capture the Earth Fairies. Nabu manages to defeat Duman, and he and the specialists go to warn the fairies, but arrive too late. Nabu decides to close the shadow abyss, despite Aisha's warnings. Nabu succeeds in closing the abyss, but uses up all of his energy and passes out shortly afterwards. Aisha attempts to use the last gift of destiny to revive him, but Ogron takes it from her and wastes it on a flower. It is unknown if he died because Aisha attempted to use the last Gift of Destiny on him, or he is in a deep slumber as Queen Morgana said. After the final battle with the Wizards of the Black Circle, Morgana tells Aisha that she will watch over him, until he wakes up.

In Season 5, Aisha is seen looking at a picture of Nabu from her mobile phone, missing him, after seeing the other Winx with their boyfriends. Nabu also appears in Episode 7 of Winx Club, appearing in Aisha's inner problem. 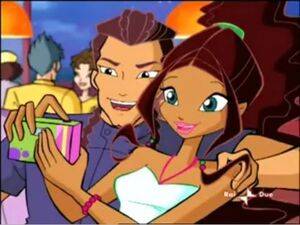 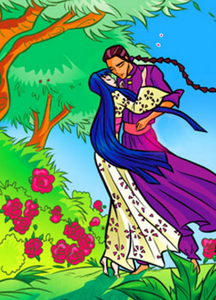 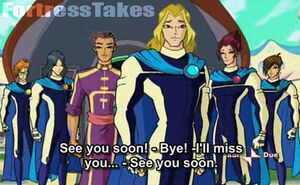 Retrieved from "https://hero.fandom.com/wiki/Nabu?oldid=1807183"
Community content is available under CC-BY-SA unless otherwise noted.