Nadia van Dyne, also known as Wasp III, is a fictional character and superheroine from Marvel comics, appearing as one of the main characters of the Champions comics.

She is the daughter of the superhero Hank Pym and his first wife Maria Trovaya, and was raised to be an assassin by the Red Room until she learned of her true lineage and escaped. Learning that her father had passed, Nadia decided to become the next Wasp and make friends with her late father's allies. Due to having Pym Particles within her bloodstream, she can manipulate her size and shoot bio-electric blast from her fingertips. She is also the founder and leader of G.I.R.L., a member of the Champions and Avengers World, and a former member of the Avengers.

She was created by Mark Waid and Alan Davis, and first appeared in Free Comic Book Day 2016 Civil War II in July of 2016.

Nadia was born in Russia to the scientist Henry "Hank" Pym and his first wife Maria Trovaya, and was born before her mother was killed by foreign agents during their honeymoon. Following this, Nadia was taken in by the Red Room and was trained to become one of their top assassins, but she would faintly remember being trained by the Winter Soldier. Once she started to show brilliance in the field of science, her handlers decided to push this since they believed it was genetic. She was then informed of her lineage to Hank Pym, and became determined to escape to find him. Nadia got her chance when she bought his particles from the black market, and started to study the sample with her friend Ying. Once she learned how to use the particles, Nadia escaped from the Red Room to find her father.

Nadia traveled to New Jersey where she located Hank's residence, but learned that he sacrificed himself to stop his creation Ultron. Though heartbroken from the news, she decided to break into his laboratory to learn more about him, and discovered his inventions and heroism. Creating a costume of her own, Nadia became the new Wasp and started to focus on gaining the trust of her late father's allies. Learning of her father being one of the founding members of the Avengers and his marriage to his sidekick Janet van Dyne, Nadia traveled to the Avenger's base to meet them. Introducing herself to the team, Nadia saved Vision's life by entering inside his body and planting explosives to lower his temperature back to normal.

As a result of her actions, Nadia gained the trust of the Avengers, and they allowed Tony Stark's butler Edwin Jarvis take her on a trip to meet the rest of her family. While traveling to Long Island to meet Janet, Nadia had to stop the micro-verse bomb and save the United States president. Once the threat was resolved, Nadia reunited with Janet, whom explained that she was fine with sharing the title of the Wasp. Afterward, the two heroines encountered W.H.I.S.P.H.E.R. agents, but couldn't learn why when news broke out of Hawkeye killing the Hulk. Distraught, Nadia attempted to prevent the start of another civil war by using the micro-verse to help Uylsses, but her plan went awry and she had to be saved by Janet. Despite her attempt, the second civil war started as Captain Marvel and Iron Man battled each other.

Following the events of the second civil war, Nadia decided to join the Avengers, and traveled to Washington to get her American citizenship alongside Kamala Khan. She would then assist Mockingbird in fighting Monica Rappaccini, and later telling Morse that her scientific work inspired her. Nadia then formed G.I.R.L., an organization made of all of the smartest women on the planet after she learned S.H.I.E.L.D. placed human women as twenty-seventh on their list. She managed to recruit Priya Aggarwal, Taina Miranda, Priscilla LaShayla Smith, and her childhood friend Ying. Though she initially wanted to recruit Moon Girl to her organization, she was unable to even after they worked together. During this time, Nadia had Matt Murdock become her lawyer to investigate her naturalization, and he explained they couldn't prove she is Hank's daughter since there was nothing of him left.

Around this time, Nadia decided to remain with the Avengers after Kamala, Miles Morales and Sam Alexander left the group to form the Champions. When she was invited with the team to Peter Parker's building, she quickly deduced that he was connected to Spider-Man in some way, and distrusted him since she didn't trust the superhero. During the Kang War storyline, Nadia went through the timestreams to place the infant Kang the Conqueror back to his reality. Following this, Vision informed her that Ultron had merged with Hank, thus using his body to continue his goals. Additionally, Nadia later learned she suffered from bipolar disorder like her father, and after having an episode, asked Janet to get her some help. 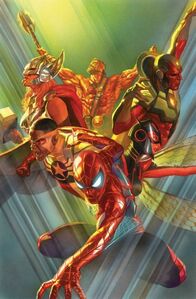 Nadia with the Avengers.