Naga (The Legend of Korra)

My Best Friend
A Great Tracker.

Hanging out with Korra

To show concern for Korra's well-being when the Avatar went to confront Tarrlok.

To help freed Asami, Bolin, and Iroh from Hiroshi's secret airfield. (succeeded)
To warn Korra about the presence of a dark spirit.
Spend more than six months apart, Naga excitedly greeted Korra upon her return to Air Temple Island.

Naga is the major supporting character of the television series, Avatar: The Legend of Korra. Nagga is a female polar bear dog that belongs to Avatar Korra as her animal companion and main form of transportation. Despite her intimidating appearance, Korra describes Naga as a "sweetheart" and regards her as her best friend. Undyingly loyal, she is protective of Korra and her friends and has learned how to use her strength to help them out of perilous situations.

She is voiced by Dee Bradley Baker.

Naga showed herself to be loyal, especially to Korra and by proxy to everyone her master trusted. She was also protective over those she cared for, as demonstrated when she worried about Korra when the Avatar went to City Hall to confront Tarrlok by herself and later tracked her down when she was kidnapped. This behavior translated in a near unconditional trust in Korra, as Naga readily obeyed Korra's orders without protest.

Naga generally showed her affection by licking people and begging them to play with her. She readily allowed people to pet her and was gentle around children. However, when she carried people around and they forgot to bring a treat, Naga could admonish them in a friendly manner by slapping them in the face with her tail, though she does not hold a grudge.

Despite her gentle nature to those she cared about, Naga could come across as menacing toward others, especially when she desired to protect her friends, such as when the Equalists tried to capture Korra and Mako, or when ordered to by Korra, such as when she roared at Tahno and threatened Judge Hotah. 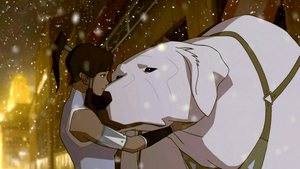 Naga showed concern for Korra's well-being when the Avatar went to confront Tarrlok. 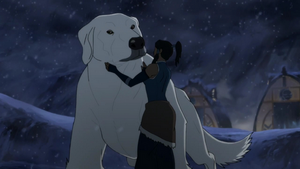 Naga warning Korra about the presence of a dark spirit.