Nagato (長門?) is a character and one of the heroes from the Kantai Collection series who was implemented into the game on the 23rd of April, 2013.

Alongside her sister ships USS Maryland, USS West Virginia, Colorado, Mutsu, Nelson and HMS Rodney, she is one of the Big Seven.

She is voiced by Sakura Ayane and drawn by Shizuma Yoshinori.

Nagato, named after Nagato Province, was a dreadnought battleship built for the Imperial Japanese Navy (IJN) during the 1910s. The lead ship of her class, she carried supplies for the survivors of the Great Kantō earthquake in 1923. The ship was modernized in 1934–36 with improvements to her armor and machinery and a rebuilt superstructure in the pagoda mast style. Nagato briefly participated in the Second Sino-Japanese War in 1937 and was the flagship of Admiral Isoroku Yamamoto during the attack on Pearl Harbor. She covered the withdrawal of the attacking ships and did not participate in the attack itself.

Other than participating in the Battle of Midway in June 1942, where she did not see combat, the ship spent most of the first two years of the Pacific War training in home waters. She was transferred to Truk in mid-1943, but did not see any combat until the Battle of the Philippine Sea in mid-1944 when she was attacked by American aircraft. Nagato did not fire her main armament against enemy vessels until the Battle of Leyte Gulf in October 1944. She was lightly damaged during the battle and returned to Japan the following month. The IJN was running out of fuel by this time and decided not to fully repair her. Nagato was converted into a floating anti-aircraft platform and assigned to coastal defense duties. She was attacked in July 1945 as part of the American campaign to destroy the IJN's last remaining capital ships, but was only slightly damaged. In mid-1946, the ship was a target for nuclear weapon tests during Operation Crossroads. She survived the first test with little damage, but was sunk by the second.

In Kantai Collection, Nagato has long black hair and red eyes. She wears a black and white japanese-style shirt with yellow trimming, black fingerless elbow gloves (again with yellow trimming) and a short white pleated skirt with a black stripe along the brim. She also wears a metallic garterbelt which holds in place her black and maroon thighhighs. On her head is her peculiar headgear which features the various details of the top of her main tower.

Often portrayed as cool and a bit prideful, being one (and the first) of the Big Seven battleships allowed to mount 16-inch guns (along with Mutsu). Secretly likes cute things.

Nagato is the secretary (or Flagship) of the Admiral in the anime, which puts her in overall command of the naval base by proxy. 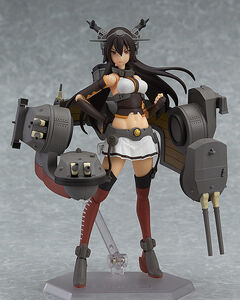 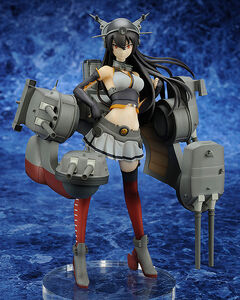 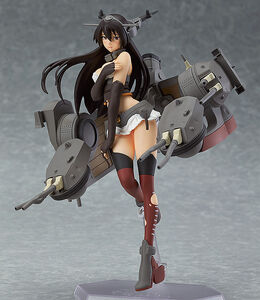 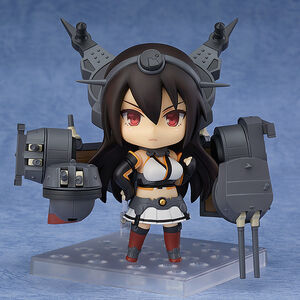 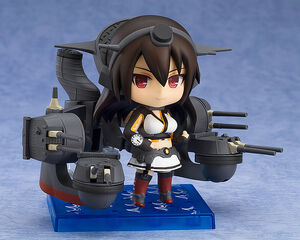 Retrieved from "https://hero.fandom.com/wiki/Nagato?oldid=1776158"
Community content is available under CC-BY-SA unless otherwise noted.