Nagisa Misumi, called "Natalie Blackstone" in the 4kids English dub, is the main protagonist of Futari wa Pretty Cure and its sequel MaX Heart. Because of her role as narrator and the amount of attention she gets in the series, she is considered the main heroine. Her Pretty Cure ego is Cure Black. Although she was previously almost unaware of her existence, Nagisa eventually became best friends with Honoka Yukishiro because of their shared roles as Pretty Cure, admiring her for her intelligence, kindness and understanding. She has a habit of saying "arienai!" when she is upset, which can be roughly translated to "unbelievable" or "I don't believe this" and also "Lucky!" whenever things go her way.

Although she is sporty, Nagisa is actually more girly and image conscious. She has a large collection of stuffed animals and is weak in academics, but makes up for it with pure spirit and energy as well as in lacrosse. She also has a large appetite and loves to eat chocolate and Takoyaki (Doughnuts in the english version) and, according to Honoka, foods with the word "yaki" in the name. She likes shopping but tends to squander her money and ends up having none when she needs it most. She also loves playing on the grass and sunny days, and she hates fighting with her friends. Nagisa has a crush on Honoka's childhood friend, Fujimura Shougo, and gets flustered whenever he is around. To her dismay, Nagisa is more popular with the girls than the boys, and is sometimes shown to be jealous toward Honoka, who gets confessions and love letters from boys more than twice a month.

Nagisa has a great sense of justice, but it is hidden inside of her and only comes out when someone is in danger. She hates that innocent people get hurt for things they had nothing to do with.

She is voiced by Yoko Honna in the Japanese version, and by Rocio Barahona in the English version.

Nagisa has short, pale orange hair and brown eyes. She usually wears her hair down. As a civilian, she is seen wearing a pink, zipped vest jacket, with a white and red shirt underneath. A grey skirt, yellow and orange socks, blue and white sneakers and a black wristband on her right wrist. In the Futari wa Pretty Cure Max Heart movie, Nagisa was seen wearing a long, turtle neck, pink dress, with red and pink hearts, outlined with white, at the bottom. The dress itself was outlined with black, and had a dark pink color at the top. Along with it, Nagisa wore pale pink gloves and black shoes with small pink bows. She also wore winterwear clothes which was a pale pink hat, pink snow goggles, a pink coat, purple and red gloves, dark blue snow pants and red shoes. Nagisa was seen in her yukata as well. It is white with a purple bow around the waist, and had lavender designs at the bottom. On her feet she wore black and red sandles. When she is practicing playing lacrosse, she holds some of her hair up with a pink heart-shaped scrunchie and is seen wearing a red and white shirt with a number '7' inscribed on the front and 'Verone 7' on the back, black gloves, a black skirt with under shorts and red and white sports shoes. 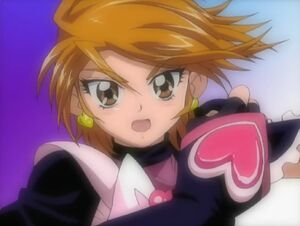 "Emissary of Light, I am Cure Black!" 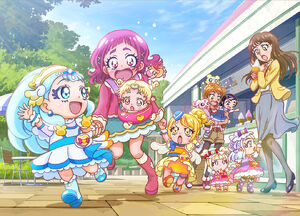 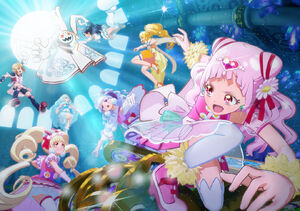 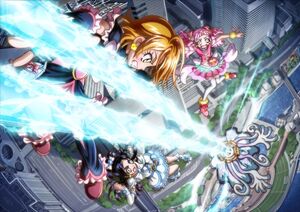 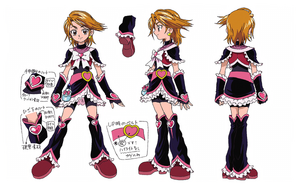 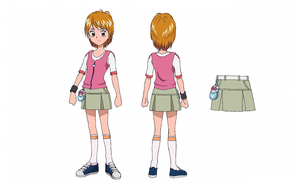 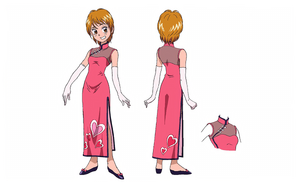 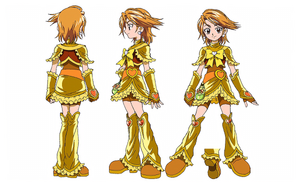 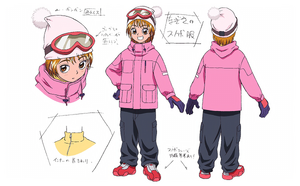 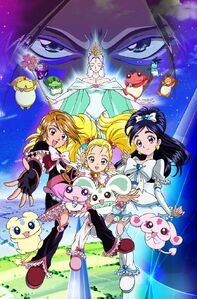 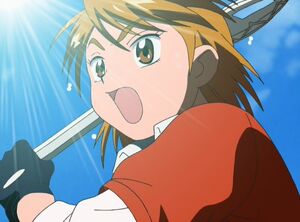 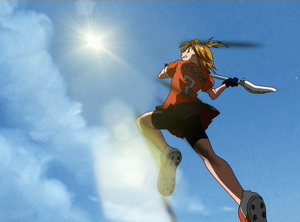 Nagisa leaps into the air during lacrosse practice. 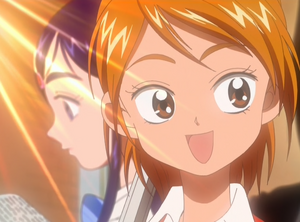 The girls pass by without noticing each other. 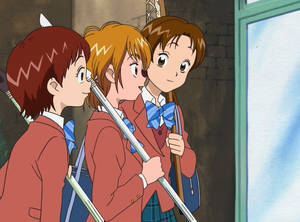 Shiho, Nagisa, and Rina on the way to school. 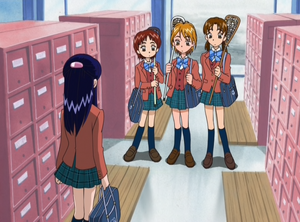 Honoka and Nagisa meet for the first time. 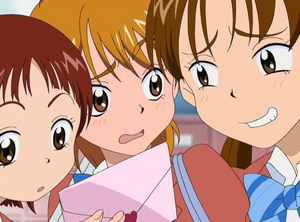 Nagisa gets embarrassed over love letters from girls. 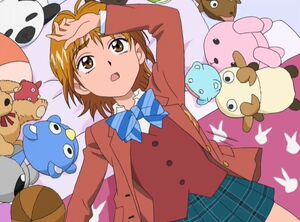 Nagisa worries over her image. 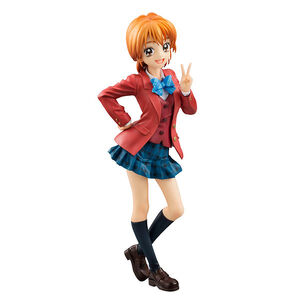 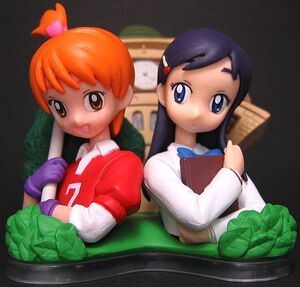 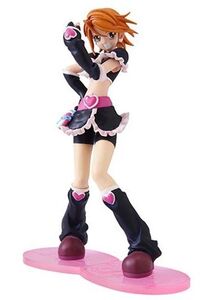 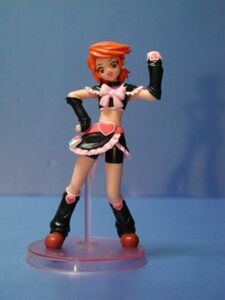 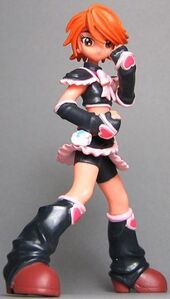 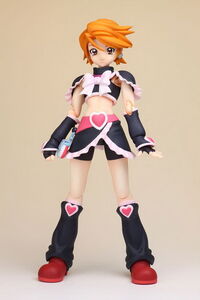 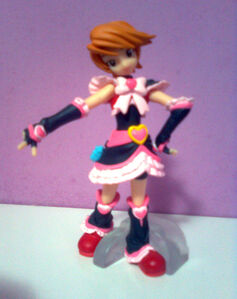 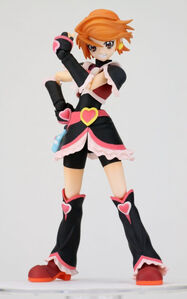 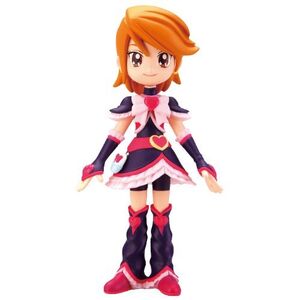 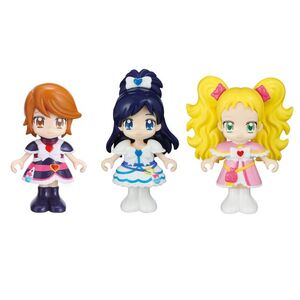 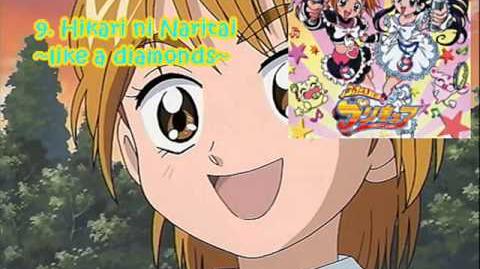 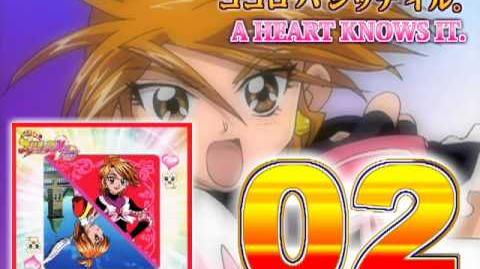