Save Guru and his People from Frieza

Nail is a Namekian from Planet Namek and supporting character in Dragon Ball Z. He is responsible for taking care and protecting Guru. He helps the Z Warriors get the dragon balls, and distracts Frieza long enough for them to use the dragonballs by being defeated. Then Piccolo finds him, and he offers to fuse with him. Since then the two have been one.

Even besides generic characteristics of their race, Nail looks virtually identical to Piccolo (i.e. face, height and built). He dons a blue vest and a white scarf around his neck. His chest and stomach are mostly exposed apart from a long flowing brown vest. He also wears baggy white pants with a blue sash and the brown pointed boots common amongst his race.

Nail is a very heroic, and honorable Namekian. He dedicates his life to the protection of Grand Elder Guru, the Grand Elder of Namek. He cares deeply about his Namekian brothers, something he shows greatly during his battle with Frieza as he jumps into the battle with little concern for his own well-being.

During the Captain Ginyu Saga, Nail has to fight Frieza in order to stop him from killing Guru and getting the Dragon Balls for himself. Even though Frieza was in his lowest power level of 530,000, Nail was no match for the tyrant, and even lost an arm (which he regenerated using Regeneration) during the battle. Before Frieza could finish Nail off, Nail revealed that this fight was to delay Frieza so Dende could get the Namekian Dragon Balls' password to the Earthlings, Gohan and Krillin. Enraged, Frieza immediately departs, leaving Nail to die on the ground.

Shortly afterwards a newly resurrected Piccolo arrives and finds the disabled Namekian. Nail is still able to speak, and asks Piccolo to fuse with him in order to increase his chances against Frieza, and at the same time save his life. Piccolo agrees after some questioning of Nail's motives, and indeed his power level increases dramatically to the point of being more than a match for Frieza's second form. 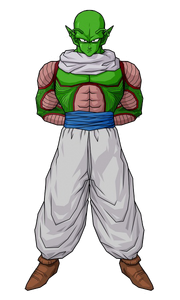