NOTE: This article is about the incarnation of Nala from the 2019 movie. The mainstream version can be found here: Nala (Disney).

Queen Nala (simply known as Nala) is the deuteragonist of the 2019 film The Lion King, a remake of the 1994 animated classic film. She is based off her original incarnation of the same name.

She is voiced by Shahadi Wright Joseph as a cub and Beyoncé Knowles, who also played Foxxy Cleopatra in Austin Powers.

As a lioness cub and adult, Nala appears as slender just like the lionesses of the Pride Lands.

When Simba learns of the existence of the Elephant Graveyard, he goes to get his friend, Nala. He finds her getting bathed by her mother, Sarafina. Nala agrees to join Simba on a trip to the “water hole”, though Sarabi forces the cubs to bring Zazu along as a babysitter.

Along the way, Simba informs Nala about the Elephant Graveyard, and the cubs resolve to lose Zazu. Just then, Zazu reveals that the cubs are betrothed, to which both react with disgust. They then race away across the water hole, getting lost among the crowd.

With Zazu gone, the cubs begin to scuffle, with Nala easily pinning Simba. Their antics make them roll right into the Elephant Graveyard. While Simba is eager to prove his bravery by exploring the area, Nala warns Simba that they should return home.

As they are exploring, they are surrounded by Shenzi and her clan. They attempt to escape through a network of tunnels, but get cornered by the clan. Just in the nick of time, Mufasa arrives and fends off the hyenas. He leads the cubs back to the Pride Lands and has Zazu lead Nala home.

After Mufasa’s death, Nala grieves the supposed loss of her best friend, Simba.

Over the years, the Pride Lands turn into a wasteland under Scar’srule. Nala is restless to leave the kingdom, but Sarabi encourages her to stay and defend her home.

One night, Nala sneaks out of the Pride Lands with the help of Zazu. She eventually reaches a lush paradise, where she attempts to hunt Pumbaa. She is thwarted by an adult male lion, whom she recognizes as her childhood friend, Simba.

The two have a joyous reunion. Nala informs Simba of Scar’s takeover, but Simba insists that they go on a tour of the jungle instead of dwelling on their problems. The two spend a romantic evening together.

Eventually, Nala brings up the subject of Scar again and urges Simba to claim his birthright. Simba refuses, and Nala sorrowfully bids him farewell.

On her way back to the Pride Lands, Simba catches up with her and joins her. Together, the two rally the lionesses against Scar and his hyena minions. A battle breaks out, with Nala taking on and defeating Shenzi.

After the pride wins the fight, Nala nuzzles Simba and watches him take his place as king. Years into his reign, the two have a cub together. 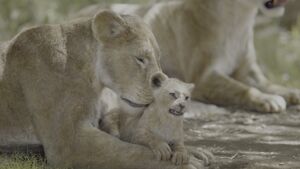 Nala being cleaned by her mother Sarafina. 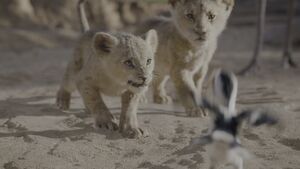 Nala with Simba and Zazu. 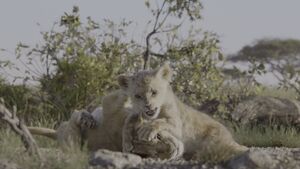 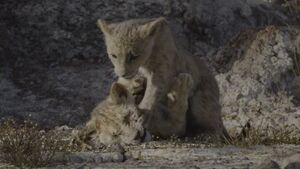 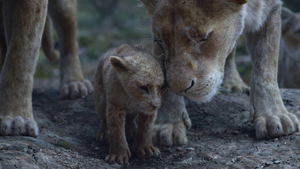 Nala being comforted by Sarafina after Scar tells the pride that both Mufasa and Simba died in the stampede. 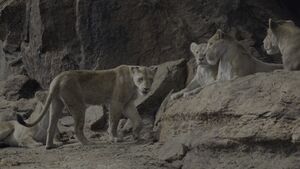 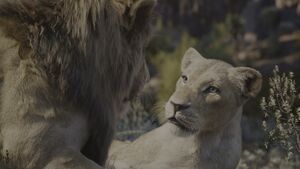 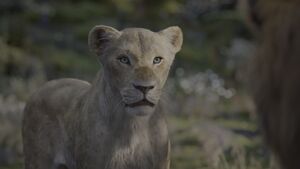 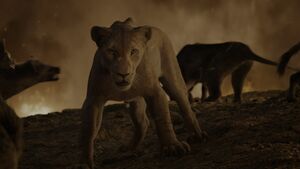 Nala participating in the Battle of Pride Rock. 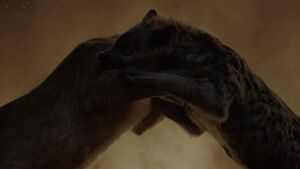 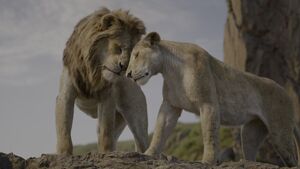 Nala as Simba's wife and Queen of the Pride Lands.