Shy, Cowardly Heroine
Nana Ebina is a close friend and classmate of Umaru in the Himouto! Umaru-chan series.

Ebina is typically seen wearing her school uniform which consists of a white blouse, a red skirt, and a red bow which she pairs with socks pulled up to her calves and brown shoes. When outside of school, she wears skirts, blouses, and other modern clothes worn by a teenage girl. Ebina often appears red in the face, along with steam rising on top of her head when nervous. She has long cherry brown hair kept loosely in pigtails with red and white striped hairties, which resemble little shrimps ('ebi'). Ebina has downward-pointing, eyes that match her hair color.

Ebina is a girl who lacks self confidence and is very shy in nature. She sometimes stammers and blushes when talking to Taihei or other small groups of friends. She often gets noticed for her bigger bust size and causes her to become self-conscious and flustered. However, despite her lack of self confidence, she is a very optimistic girl.

It is implied that she has feelings for Taihei, due to his kindness and him being the first person to look her in the eye and talk to her when she first moved. 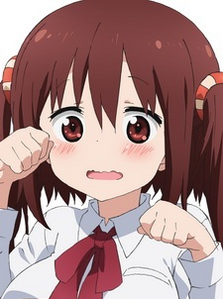