Member of the Blood

Eating, Hanging out with The Protagonist, Ciel, Julius, etc.

Nana was the daughter of a God Eater whose name is Yoshino who always told Nana to eat her Odenpan whenever she felt sad. One day Yoshino was dying in the battlefield with Nana by her side and she told Nana to run away herself. Soon, a team of God Eaters was dispatched to rescue Nana; however, her hidden power started attracting Yaksha to the area, resulting in a battle that ended in the deaths of both sides. Dr. Rachel Claudius later arrived to retrieve Nana, who as a result of the incident blocked off her tragic memories of her past and was admitted to the orphanage Magnolia Compass. She is later recruited into the Blood unit on the same day as the Protagonist.

Nana has a cheerful and free-sprited nature coupled with a voracious appetite. Orphaned from since she was little, she does not recall her past well. Her Odenpan (Oden bread) sandwich is a food she learned to make from her deceased mother who was also a God Eater. 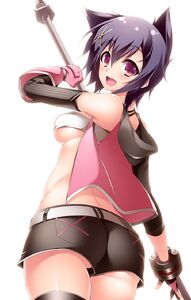 Retrieved from "https://hero.fandom.com/wiki/Nana_Kouzuki?oldid=1636831"
Community content is available under CC-BY-SA unless otherwise noted.