Seventh One For All User

See that All For One and his legacy are vanquished (posthumously ongoing).
Ensure that the legacy of One For All survives (succeeded).
Keep her family safe from the world of heroes and villains (ultimately failed).

Shimura was the seventh person to inherit the One For All quirk, a stockpiling ability passed on from user to user that increased in power with each new person. The reason for the quirk's existence was to defeat All For One, the dark emperor of the Japanese underworld whose combat might was unparalleled. The hope of the power was that one day One For All would grow strong enough that a user of the power could defeat All For One and free Japan from his influence.

Nana eventually took on a disciple named Toshinori Yagi, who she intended to be the inheritor of One For All. After passing on the power to her student, Shimura sacrificed her life so that Yagi could escape the vile clutches of All For One. Toshinori Yagi, known as the world's greatest hero All Might years later, was able to use the sacrifices provided by his master and the other previous users of One For All to finally defeat All For One.

However, in an ironic twist of fate, Shimura's estranged son Kotaro Shimura had a child named Tenko who would go on to become the successor of All For One. Tenko, known as Tomura Shigaraki, eventually inherited the power of the dark emperor and built himself a criminal empire to rival his predecessor's. Nana Shimura's legacy was not one of complete failure however, as All Might's successor Izuku Midoriya carried on the mantle and opposed Shigaraki.

Shimura is voiced by Mie Sonozaki in the Japanese version of the anime and by Stephanie Young in the English version. Young has also voiced Nico Robin in One Piece, Clare in Claymore, Olivier Mira Armstrong in Fullmetal Alchemist: Brotherhood, Arachne Gorgon in Soul Eater, Towa in the Dragon Ball franchise, Sibyl System in Pyscho-Pass, Sherry Cromwell in A Certain Magical Index, Kazehana in Sekirei, and Cordyline in Tenchi Muyo!. 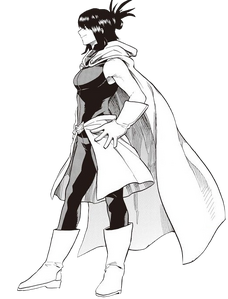 Sideview of Nana Shimura in the manga. 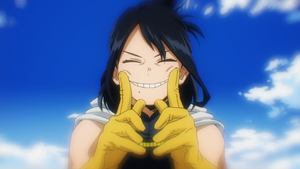 Nana telling her disciple Toshinori Yagi to always smile while showcasing her own heroic grin. 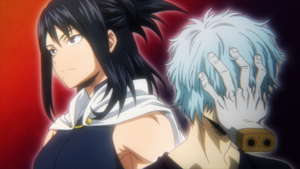 Due in part to her well-intentioned influence, Nana's grandson became the villain Tomura Shigaraki. 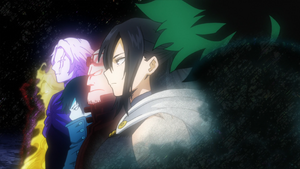 The ninth bearer Izuku Midoriya seeing Shimura and his other predecessors in a vision.