Discipline bad children and make them be good children

Nanny McPhee (small c, big P), is the main protagonist in the Nanny McPhee films. She was portrayed by Emma Thompson.

She is an immortal witch and nanny and her job is to discipline bad children and make them be good children. In the end of the movies, she turns from ugly to beautiful.

In the first film, Nanny McPhee arrives at the Brown household where Cedric Brown tries to cope with his seven naughty children. At first, the children try to make Nanny McPhee leave but their attempts don't work. The Browns were at first, naughty and wild, so Nanny McPhee used magic to calm them down. At the end of the movie, Cedric marries his maid, Evangeline, after his children wrecked his wedding to Selma Quickly. The Brown children eventually grow to like Nanny McPhee, after asking for her help many times. The movie ends with Nanny McPhee quoting how she works: "When you need me, but do not want me, then I must stay. When you want me, but no longer need me, then I must go." She is very intelligent, yet firm and disciplined; though the children originally disliked her, they gradually grew onto her. The kids are very wild but they grow to respect and love her. But before that, the children did not want her as Simon says earlier on in the film "We will never want you",

Role in Nanny McPhee and the Big Bang

In the second film, Nanny McPhee arrives at a farm during World War II. Living in the farm are Isabel Green with her three children, Norman, Megsie and Vincent. Mr. Green had been forced to fight in the war and none of his family knows if or when he will return. One day, Isabelle's niece and nephew, Cyril and Celia Gray arrive on the farm so that they would be safe from the bombs in London. None of the children are thrilled with this idea and clash instantly. When Normal and Megsie refuse to sleep with their cousins, saying that they'd rather sleep with a goat and a cow, respectively (and Vincent adding in that he'd rather sleep with an elephant), she makes them share a bed along with the animals requested. Meanwhile, Mr. Green's brother, Phil, tries to make Isabel sign over Mr Green's half of the farm to the Biggles, who are attempting to kill him for debt. One of his attempts is to dig a hole in the farm so that the prized piglets escape. However, in the morning, the cousins work together with the three children to capture the piglets, thwarting Phil's plans, while Nanny McPhee makes it more difficult and interesting by making the pigs able to climb trees, jump far distances, and synchronized swimming. When the family goes on a picnic, Nanny McPhee tells Megsie, Celia, and Vincent about her medals. Later when they find out that Mr. Green is 'dead', she takes Norman and Cyril to London to find out if Mr. Green is really dead. In the meantime, she wills the baby elephant who'd slept with Vincent to help the children steal away the pens so that Isabel would not sign the contract immediately. In the end, Nanny McPhee conjures up a barley storm, harvesting all the barley and dissolving the bomb in the field as well, creating pictures flying in the sky and finally making many neat piles of barley along with a slide made by the bomb metal. She then leaves the farm, having done her job, but gives every one of them one of her medals. On the way, she passes Mr. Green, who turns out to be alive after all. 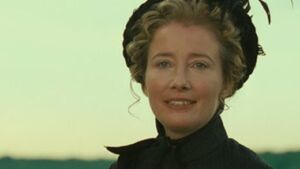