Nao Midorikawa (April in the English Dub Glitter Force) is one of the main heroine in Smile Pretty Cure!. She is a plucky girl with a strong sense of justice, and has no tolerance for wrongdoers. An older sister-type, she is popular even with the girls. While tough, she also has a feminine side, as she loves cute things. Excellent at sports, she is part of the girls' soccer team.

Her alter ego is Cure March or Glitter Spring in the Glitter Force dub, and she controls the power of wind.

Out of the 5 girls, Nao is the tallest in terms of height. She has dark green hair worn in a ponytail at the top of her head with a yellow bow and bangs parted down the middle. Her eyes are a dark shade of green. Her casual outfit consists of a 3/4 long-sleeved yellow-green button-down shirt with multiple decorative badges, olive khaki shorts, orange socks and black boots with red laces. Her summer outfit consists of a short-sleeved light green blouse, a blue short denim skirt, khaki socks and light brown shoes. She wears her school uniform with a green tie and a pale green sleeveless pullover.

As Cure March, Nao's hair becomes bright green and much longer. The side of her bangs curl in towards her face, and her back hair is worn in a very long ponytail held with a gold barrette with an angel wing attached. Part of her hair is also worn in high twintails held up with smaller yellow barrettes. She wears her tiara on her forehead, and her earrings on the helix of her ears. Her outfit is mainly light green, with dark green lining and white highlights. Her sleeves are single-layered, and the bow at her chest is small with a large frilly piece behind it. The back of her top extends out in a single pastel green frilly piece. Her arm protectors are elbow length with light green folds on top and dark green ribbons at both the wrists and elbows. Her boots are short, with light green legwawrmers, tipped with green as well as her heels, and small dark green bows.

In Tiara mode, her white tiara is replaced by a golden crown worn in the center of her head. The centerpiece of her tiara is a green jewel, and the angel wing on her barrette turns golden as well. Her white angel wing earrings are replaced by gold ribbon-shaped earrings with green hearts in the center, and she now wears them on her earlobes.

Nao is said to have a strong sense of justice and does not easily forgive one's wrong actions. She is also known for her exceptional courage. Despite her bravery, she is a scaredy cat and have a few phobias of Bugs and heights that was revealed when the cures were shrunk by Majorina's Turn me small. She get scared easily sometimes like when she saw Miyuki and Akane headless (they were wearing Clothes, but got their helmets down) she freaked out and held on to Reika.

Along with the other four Smile! Cures, Cure March can summon a huge rainbow shield or barrier in the movie "Pretty Cure All Stars New Stage: Friends of the Future!". This is further enhanced by Fu-chan's last bit of power. 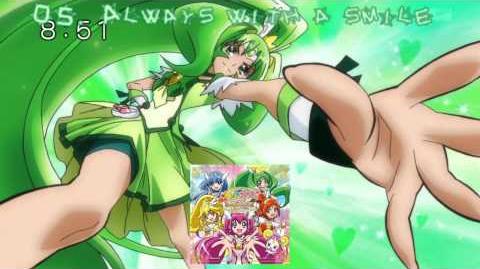 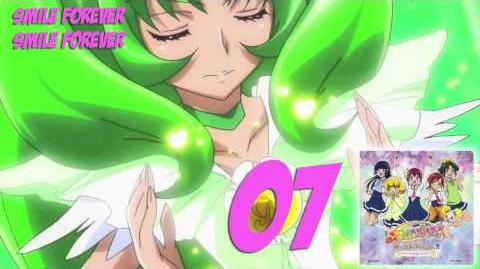 Smile Precure! Vocal Album 2 Track07
Add a photo to this gallery
Retrieved from "https://hero.fandom.com/wiki/Nao_Midorikawa?oldid=1521247"
Community content is available under CC-BY-SA unless otherwise noted.