Dragged into a mysterious portal by-way-of a Victor Donovan's M.I.S.T. time-travelling experiment, the ruler of Japan’s Warring States era Ii Clan, Naotora Ii, emerges and stranded in present-day next to a competitor of the DEAD OR ALIVE fighting tournament. Given no other choice but to fight for her life, and keeping her family motto of ‘once on the battlefield, one must face the enemy head on’ in mind, a determined Naotora sets out to emerge victorious from this strange new challenge.

Naotora is kind and optimistic but shy. She is habitually apologetic for any mishap she believes to have caused others, which even extends into battle against her enemies. She often remembers the words of her best friend, Tazu, or her great-grandfather, Naohira, for guidance. Her friend's words instill her with the bravery to fight; her ancestor is the all-knowing sage of their family creed to her. She is unfortunately unaware that Naohira has become a loon in his elderly years and is often misguided to do several violent and/or unnecessary deeds on his behalf. Her lack of tact has made the elders of the Ii clan shake their heads in shame. Their condemnation and her bashfulness doesn't cloud her selfless desire to persevere for Naomasa's sake.

Although she half-dreads her duties, Naotora feels very insecure of her giant proportions. She towers over other women and men, and awkwardly sticks out in crowds. Her showy battle attire embarrasses her, but she keeps it because Naohira told her to wear it for their family honor. She mistakenly believes herself to be ugly, clumsy, and brutish. When she isn't worried about the future of her clan, she fears the possibility of forever forsaking her chance to live a normal life of femininity.

Naotora is grateful to have someone understand her and feels safe with his reassurance. She often gains the courage to decide her clan's future through their private chats together. Naotora dotes on Naomasa and happily smothers him with affection. She frets when the daredevil antics from his playable counterpart offends others, often apologizing for him and voicing her faith in his honorable traits. Even when he reaches adulthood, she hasn't dropped her preference for calling him by his childhood name, Toramatsu, and struggles to correct herself. Naotora rejoices when Naomasa kindly permits her to keep using it. 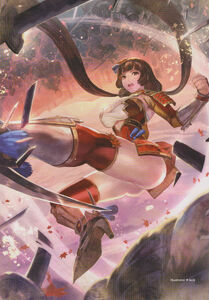 Naotora Ii in Samurai Warriors 4.
Add a photo to this gallery

Retrieved from "https://hero.fandom.com/wiki/Naotora_Ii_(Koei)?oldid=1476451"
Community content is available under CC-BY-SA unless otherwise noted.