Naotsugu, The Warrior of Panties

Inhuman strength, Expert swordsman, Can force enemies to focus on him

Naotsugu (real name: Naotsugu Hasegawa) is the tritagonist of the light novel and anime series Log Horizon. He is a 25-year-old business man and a veteran player of Elder Tales, as well as an old friend of Shiroe. Shortly after forming a party with Shiroe and Akatsuki, he becomes one of the founding members of Log Horizon and takes Touya under his wing. He is a Human Guardian-Border Patrol.

He is voiced by Tomoaki Maeno in the Japanese version of the anime and Andrew Love in the English version, the latter of whom also voices Souichiro Takagi.

Naotsugu has short, grayish hair and a roguish smile. Unlike Shiroe, his height in the game (183 cm or 6 feet) is approximately the same as his height in real life.

Before the Catastrophe, his character had a diagonal slice cutting through one of his eyebrows, but after Naotsugu became trapped in the game, his features changed to mirror his real face more closely, and the scar disappeared.

His original armor, while Artifact-class and serviceable even after two years of inactivity, is somewhat bland and understated. However, he acquires flashier Phantasmal-class armor developed by Akiban researchers before traveling to the Abyssal Shaft.

As the "Warrior of Panties" and an "open pervert," Naotsugu is the cheerful big brother character of Shiroe's team, albeit one subjected to frequent derision and occasional physical attacks from Akatsuki (the latter which is exaggerated in the anime). A good, solid person and the Debauchery Tea Party'smost reliable tank, Naotsugu's greatest fault is his incessant need to crack off-color jokes, especially those pertaining to women's underwear, which usually results in Akatsuki kneeing him in the face. Naotsugu also believes with passion that all men are perverts, even outright claiming that all men are either open perverts like him or closet perverts and accuses Shiroe of being the latter. Oddly, he doesn't seem to apply the same standards to women.

Despite his perverted mind, Naotsugu is nevertheless a kind man who gets along well with others. This includes Akatsuki, whom he quickly becomes friends with despite her constantly kneeing him in the face and him frequently making fun of her height. While not nearly as cunning as Shiroe, he has much better interpersonal skills and can pick up on things that the latter often misses. He also has a strong sense of right and wrong, which is shown by the outright disgust he showed at PKs, saying he refuses to 'back down from freaks who attack people for fun'.

Although he constantly makes perverted jokes, Naotsugu can be surprisingly shy when on the receiving end of such humor, as he becomes flustered whenever Maryelle glomps him, hugs him, or asks him to touch her breasts, and is annoyed by Tetora's constant flirting. In addition, despite being the second-oldest member of Log Horizon (after Nyanta), Naotsugu can be rather dense and slow to catch on to things, as he still hasn't figured out that Tetora is a man in real life, something every other member of the guild knows. In spite of this, Naotsugu proves time and time again to be an invaluable member of the guild as well as a highly capable mentor to Touya, who respects him almost as much as he does Shiroe.

One of Naotsugu's best traits is his patience and laid-back attitude, willing to roll with whatever happens. He and Shiroe became friends during one of the Tea Party's offline meetings, where he mistook Shiroe's oolong tea for pu-erh and was lectured about the difference. However, instead of getting annoyed or angry, he actively participated in the discussion, and the two became fast friends. In spite of appearances, he's pretty good at sensing his boundaries; he doesn't bother Shiroe when he sees that Shiroe's concentrating on something else, and when Shiroe rejects the warm wine Naotsugu offers to help him relax, Naotsugu doesn't bother him about it and knows that Shiroe will recover on his own.

Naotsugu is shown to greatly enjoy his new life in the world of Elder Tales; he mentions at one point that, if given a choice between staying and risking his life in an attempt to find a way back home, he would most likely choose the former, as he has no particular attachment to the real world due to not having much going for him besides the daily routine at his job.

Naotsugu's main class is a Guardian, and so his main role lies in protecting the members of his party. He is arguably the powerhouse of Log Horizon, as he is the largest member of the guild and the one with the highest defence. His subclass is Border Patrol, and so he has strong defence and offence in combat and can take heavy damage from foes, always holding ground as long as possible until victory or defeat.

While his attack power isn't as high as Akatsuki's, he is still able to deal a high amount of damage. At the time of the Apocalypse, he was Lv. 90, the level cap before the Apocalypse. He wields a sword in his right hand and a shield in his left. He appears to be very strong, as both his sword and shield are very large.

Naotsugu's outfit as of volume 7 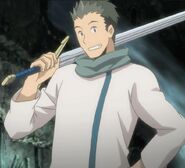 Naotsugu out of his armour

Akatsuki kneeing Naotsugu in the face 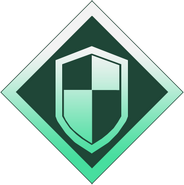 The symbol of the Guardian, Naotsugu's class