Napoleon and Lafayette are secondary characters from Disney's The Aristocats.

Napoleon is a skinny Bloodhound and Lafayette is a fat Basset Hound. The two are stray dogs that live on an abandoned windmill site in the French countryside. Their one hobby is chasing any humans who come near their territory, whether or not they're in a car.

Napoleon is the oldest dog, whereas Lafayette is the youngest dog.

Napoleon is very easygoing and he is the calmest and the most mature one of the duo. Lafayette can be really ditzy, excitable, and rambunctious at times.

The lanky Bloodhound and the plump Basset Hound love to goof off. 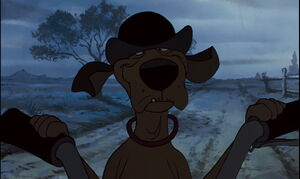 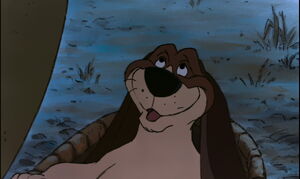 Lafayette
Add a photo to this gallery