He is a member of Team Bucciarati and, by extension, Passione. Narancia follows Giorno and Bucciarati in their mission to protect Trish Una due to sharing a similar tragedy as her.

Narancia's mother passed away when he was 10, leaving him to be raised by his neglectful father. His "friends" framed him for assault which resulted in him being taken to juvenile detention. After being released from prison, he suffered from an eye condition due to being poorly treated in said prison. This resulted in him being avoided by his peers. One day while looking for some food, he was found by Fugo who brings him to Bucciarati to give him food. The mafioso decided to give Narancia said food before sending him to a hospital, allowing him to get treatment for his eye condition. Narancia, after figuring out that Bucciarati was with the mafia, stated that he wanted to join which resulted in the mafioso scolding him. Narancia soon figures out that he was scolded because Bucciarati cared for his safety. Despite this, Narancia took the initiation, gained a stand, and joined Bucciarati's team.

Narancia's first appearance in the part was with team Bucciarati where he was learning math with Fugo. Narancia made a mistake in multipication, angering Fugo who stabs him with a fork. Narancia responds by threatening his friend with a dagger. Before the situation escalates, Bucciarati introduces the team to Giorno. Narancia commented on Giorno's age due to the former being 2 years older than the latter. After Giorno succeeded his initiation, the team decided to go and find Polpo's treasure due to the owner's death. On their way, Narancia was attacked by an enemy stand and was incapacitated until the stand user, a man named Mario Zucchero was defeated. After kicking the man's body and witnessing Mista's method of torturing Zucherro, Narancia counts the syllables in the man's name. He later dances as Zucherro is tortured.

After the team retrieved the treasure, they were tasked in guarding their boss' daughter, a teenage girl named Trish Una. As it turned out, Narancia had attacked her thinking that she was merely a janitor. A few days later while buying some groceries, he was met by an assassin named Formaggio and his stand, Little Feet. Narancia was slowly shrunk by the enemy stand, failing to kill the assassin at various occasions. Eventually he was placed with a spider which he was forced to fight. He was however able to free himself by shooting at leaking gasoline, blowing up Formaggio and causing Little Feet's ability to revert. Due to the burning car, Narancia was unable to track down his opponent, forcing him to burn everything in order to lure Formaggio out. They later engaged in a stand-off, ending with Narancia winning due to Aerosmith's speed and range.

However, team Bucciarati's location was compromised as a result, forcing them to board a locomotive. While in the train, the team were soon under the effects of an enemy stand. Luckily, Mista and Bucciarati were able to take them out, allowing the team to escape. Some time after that, Narancia was sent to get Giorno and Mista who were tasked on getting an important disk. Unfortunately, he passed by the two while they were in a, suggestive position, frightening Narancia who decides to never speak of what he just saw.

After Bucciarati's fight against Diavolo, Narancia was given a choice to join the former in a quest to kill the latter. At first he was uncertain and wished for Bucciarati to order him to join. He stayed by the shore for a very short while, being unable to decide. After seeing Trish's injuries however, he makes up his mind and joins the rest of the team due to similliarities to their past. The team later arrive at a restaurant where they accidentally mistaken a civilian for an assassin. Narancia however was attacked by two enemy stands, one of which caused him to be unable to say the truth. While the team was confused of his strange behavior, Giorno began to grow suspicious, resulting in him being attacked first. Narancia however was able to save him by using a misfired shot to track him down and after being forced to trick his team into blowing up, he chases after the enemy stand users. As it turns out, he has ripped out his own tongue to prevent the enemy stand from affecting him while gaining a new tongue from Giorno. Narancia was able to kill off his enemies in a stand-off and the team continued their journey. While on the plane, Narancia was attacked by an enemy stand due to his stand's speed, resulting in him being incapacitated.

Some time after that, the team discovered that Abbachio was killed in an attempt to uncover Diavolo's identity. Narancia was particularly shaken by this event, trying everything to bring Abbachio back. He stopped after being scolded by Bucciarati and later, he was able to join the team when they found Diavolo's face print left behind by Abbachio. The team continued their travel on boat only to find that the city they arrive in was under the effects of a stand ability. Narancia jumped back into the boat out of panic, resulting in him being infected by the enemy stand's ability. Before he could be infected any further, Mista figured out how the enemy stand works and shoots a gas tank on the boat, launching the whole team upward. Narancia was severely injured because of this and became incapacitated for a period of time.

After the enemy stand user was killed off, Narancia joins the team on their way to meet with the hacker which is revealed to be Polnareff who was fighting off Diavolo. The Frenchman was forced to stab his own stand with the arrow, causing it to turn into a requiem stand with the ability to switch souls. Narancia wound up in Giorno's body. However, the team let their guard down which resulted in Narancia's death as he was impaled in some metal bars. Despite Giorno's attempts at saving him, Narancia's soul has left the body. Giorno returns to his empty body as the team rush to chase down Diavolo, leaving Narancia's body which was covered in flowers.

Narancia is a teenage boy of average height and gangly figure. He has a childish face and messy dark hair with bangs over his eyes.

He sports a dark, slim tank top and pants. He has lighter accessories, including a bandana, wrist bands, and a short skirt.

Narancia carries with him a switchblade he sometimes uses to threaten people and has occasionally used in actual battle.

Aerosmith is a powerful battle-oriented Stand possessing not only a wide array of powerful weaponry to destroy its enemies but also boasts above-average nimbleness due to its nature, size, and good range. Moreover, its ability to detect carbon dioxide makes it a great scout and radar.

Aerosmith appear in Episode 10 after Formaggio scratch Narancia. Aerosmith is a powerful battle-oriented Stand possessing not only a wide array of powerful weaponry to destroy its enemies but also boasts above-average nimbleness due to its nature, size, and good range. Moreover, its ability to detect carbon dioxide makes it a great scout and radar. 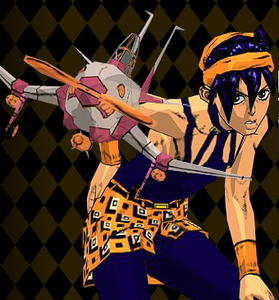 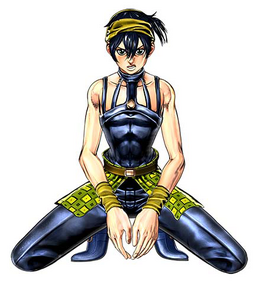 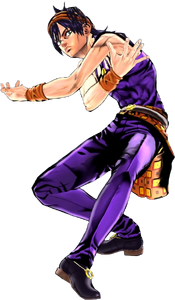 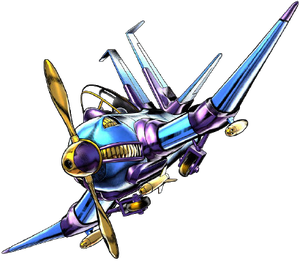 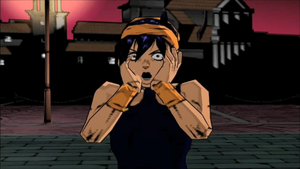 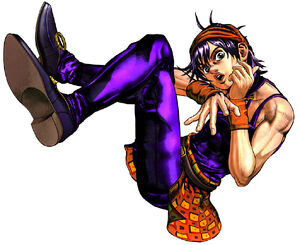 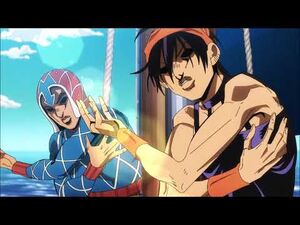 【ジョジョ５】ギャングダンス Gang Torture Dance
Add a photo to this gallery

Retrieved from "https://hero.fandom.com/wiki/Narancia_Ghirga?oldid=2227950"
Community content is available under CC-BY-SA unless otherwise noted.