Nash and Ramsey are the tetartagonists of The Good Dinosaur. They are the young Tyrannosaurus children of Butch.

Nash is voiced by A.J. Buckley and Ramsey is voiced by Anna Paquin, who also played Princess Sheeta in Laputa: Castle in the Sky and was well known for playing Rogue in the X-Men movie series.

Ramsey: A fearless, whip-smart and no-nonsense female Tyrannosaurus Rex rancher, Ramsey loves the challenge of driving a herd of longhorns with her father, Butch, and her little brother Nash. Ramsey has a lively, outgoing personality—she likes good jokes, tells a mean story and has a soft spot for those in need.

Nash: An enthusiastic young male Tyrannosaurus Rex, Nash lives for adventure, and loves when something unexpected breaks up the routine of rounding up longhorns with his father, Butch, and his big sister Ramsey. He isn’t the sharpest of spurs and has trouble keeping track of their herd, but his mischievous charm and positive attitude make him good company out on the range. 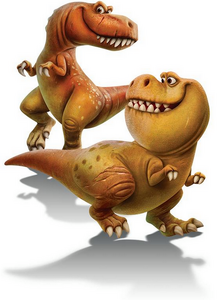 Retrieved from "https://hero.fandom.com/wiki/Nash_%26_Ramsey?oldid=2302438"
Community content is available under CC-BY-SA unless otherwise noted.