The Cult of Aten
Abdel Daoud

Nassir is a supporting hero in in the MMO The Secret World. Nassir is a member of the Marya (young warriors), a counter-terrorism unit descended from King Tut's private bodyguards - tasked with wiping away and keeping gone the Cult of Aten.

The Cult of Aten and The Marya

The Cult of Aten is the remnants of Pharaoh Akhenaten's legacy in Egypt. Akhenaten's mind was touched by the extra-dimensional entities known as The Dreamers when he was young. Akhenaten was mentally conditions through visions in his sleep into being an acolyte of The Dreamers. As Akhenaten grew-up everyone could tell something was off about him but by the time it came for him to inherit the throne he had become a power-mad true-believer of the evil cosmic-entities. Akhenaten rejected the Egyptian pantheon and made worship of The Dreamer who had spoken to him, Aten, mandatory for the people of Egypt. Akhenaten spread The Filth, run-off from the Dreamers, which enslaves the mind, warps the body and pollutes the soul, of any mortal it touches. With the Filth to trap people in a state of living death and the country firmly under Akhenaten's rule the people of Egypt were subject to one of their darkest times. Akhenaten's first major obstacle were two brothers one of which lives on as the sage named Khalid, who opposed him and freed a good many of his slaves. In an effort to become strong enough to over-come all future opposer, Akhenaten began preparations to have himself transformed into a mummy, during the embalming rites however Akhenaten would be sealed in a state of living death by The Sentinels, avatars of the Egyptian gods. With Akhenaten in no condition to continue leading the Atenists, his son King Tutankhamen inherited the throne.

Tutankhamen, or Tut, had recognized the madness of his father and gathered all remaining loyal royal-guards to begin a mass purge of the Atenists. Tut would die prematurely but he decreed his body-guards must continue the work without him and keep Egypt safe from any who would re-institute his father's madness. The Atenists were nearly wiped out, but there was always a small sect of people who would pass on rites and convert others behind closed doors. The body-guards broke-off into two group, one became a base for The Templars, while the other remained in Egypt to remain true to their original purpose and patrol for Atenists, this group would be known as The Marya.

In 2012 a bomb was set off in Tokyo, a Filth powered dirty bomb, which warped the entire city of Kaidan. Since the bombing, Filth activity around the world has spiked, including a resurgence of The Cult of Aten. The Atenists no longer hide behind closed doors, they walk and indeed, raid the streets openly. With a new way of brainwashing, human-sacrificing death cultists, The Marya have stepped up their efforts and now actively fight the made cultists before they can overwhelm the land again.

In it's modern incarnation the Marya rely on military training and hardware. Their logic being that in the times of the old stories of ancient un-kill-able evils, no one had machine-guns. Nassir is one of the lieutenants of the Marya in the modern day. Nasir had lost his sister when he was young, she was devoured by a monster that crawled out from the montains. At age eleven Nassir was orphaned when his mother was dragged off by Atenists (presumably to be either ritually sacrificed or converted), Nassir's father left to go save his wife from the cultists but would be killed by them, leaving Nassir effectively alone. Nassir enrolled in the Marya to prevent what happened to him from happening to anyone else. He would be trained by some American Special Forces, special forces with knowledge of inter dimensional demolition, Nassir stressed that they were "special, special forces" - considering the unit's paranormal nature and the fact they were a secret team from the US, it is likely Nassir's mentors worked for the Illuminati. The fate of the unti is unknown but the knowledge they passed on to him would make Nassir the most qualified explosives expert in Al-Marya and a major boon for the Marya.

Nassir wishes to disrupt Atenist operations that are contaminating the water and food supply around the town of Al-Marya to convert more members. Nassir's first major task is infiltrating the factory to find out their defenses, with his follow-up to the operation as blowing up the plant to prevent it from spreading it's poison.

The Last Train to Cairo

Nassir's concerns turn ever on the other members of the Marya being rounded up by the cultists. With the Player having proven her/his-self, Nassir then send the player on a mission to save his people from the Atenists and raid their last major headquarters around Al-Marya. Nassir gives the player C-4 proximity mines to blow-apart the cultists from a distance. After piecing together instructions from four of the cultists the player will find they have one other headquarters a warehouse to the far west.The warehouse is a date-farm and processing center, where dates are being poisoned with Filth directly and shipped out to locals to create more cultists. As the captive Al-Marya are also being herded off to the date-factory raiding it will both hurt the Atenist operations and free those still alive.

Sneaking into the date-factory will reveal Abdel Daoud, the defacto head of the Atenists with Akhenaten still in hibernation. Daoud will use an anti-anima gas to rob the Player of most of their powers and trap them in a prison cell. With the Player helpless Daoud reveals not only is he being contacted by Aten much as Akhenaten was, but also that Aten has told him of a way to create a second incident like what happened in Tokyo. As soon as Daoud leaves the Player can take the opportunity to beat-up  the guards and break-out even without powers. After freeing the imprisoned Al-Marya, the last of them will point out Säid to the player saying that Säid will know what the Cultists are up to.

After leaving the factory, the Player heads straight to Säid Säid was a previously met character in the main quest-line and a contact in-between set-pieces. Säid is a member of The Kingdom - reanimated mummies who leveraged their ancient treasures for obscene wealth and then formed a union with each-other to create even more wealth and form a controlled black-market, mostly dealing in ancient Egyptian relics. Because of his station Säid agrees to help the Player for a favor recovering a relic. Upon recovering the relic, Säid points out it is a fake but decides to help anyway. While teaming with Säid the Player will find that the Atenists are an artifact from a previous age, when human-kind reach astronomical technological levels, a time whose stories are kept alive as myth-and-legend of gods of ages past. The artifact is known as an Arc. Arcs house tremendously powerful devices from the previous age, detonating one would cause a chain-reaction of Filth for miles. Säid points out he wishes to make things right as the last artifact he helped ship out of Egypt turned out to be another such device which was used to create the Tokyo bombing. Together with Säid the Player will recover the Arc to contain Daoud's newly uncovered device. With Daoud already far ahead on a train and the device loaded, the only way to catch up is with the crazies driver in the desert - which leads the Player, and by extension Säid as well, to Nassir.

Nassir is eager to help once he hears what was uncovered from the Date-Factory. Nassir drives side by side with the train tracks and begins catching up to the train. Before long Säid notes the train is approaching a canyon, cutting off the option of driving along side the train. Nassir gets his jeep as close as he can allowing the Player to jump on-board and make way to the front of the locomotive where Daoud and the device are. With nothing more they can do, Nassir tries to find an alternate route around the tracks while Säid call The Council of Venice to defuse the situation once the device is placed back into the Arc. The Player meets Nassir and Säid again once the device is secured in the Arc and the train's break's are engaged. Nassir congratulates the Player and points out all of them are friends now forever. Cynical remarks from Säid prompt Nassir to assure him the only we they aren't friends is if he ever does something to betray them, and if that ever happens he will kill Säid again, many times. With nothing to do but accept the friendship over the inconvenience of a enemy, Säid reluctantly accepts and Nassir proposes a great celebration for stopping the threat.

Nassir acts care-free and perky. He has a fondness for American action-films and relates everything he, or the Player or Säid does to action-movie plots/characters. In his spare-time Nassir dances wildly and makes jokes. In truth Nassir is actually deadly serious about his duty. With his birth-family lost to him the Al-Marya mean a great deal to him as surrogates. It is because Nassir lost his sister, mother and father at a young age that Nassir is completely focused on stopping the Atenists however he points out that if one can not stop to have fun, there is nothing worth fighting for. Shani, the head of the Al-Marya, points out that despite how much of a fool Nassir seems on the surface he worries about his fellow Al-Marya greatly and puts on his brave-face to inspire and cheer them onward. 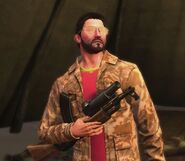 Nassir at the Marya base camp

Nassir driving Säid and the Player along the train-tracks

Säid and Nassir
Add a photo to this gallery
Retrieved from "https://hero.fandom.com/wiki/Nassir?oldid=1861429"
Community content is available under CC-BY-SA unless otherwise noted.