Blake (in the manga)

Become the champion of Unova and stop Team Plasma (all succeeded)

Adventrous Kid
Nate is the male player character in Pokémon Black 2 and White 2. His female counterpart is Rosa.

He is voiced by Miyu Irino in the Japanese version, and by Tom Wayland in the English version.

Nate is a Pokemon Trainer who trains hard to become more stronger by defeating many opponent trainers as soon as possible. As a young boy, he was inspired to become a Pokemon Trainer after seeing the world-class trainer, Shiro Hakage, defeat Ghetsis of Team Plasma and save the world from takeover. Because of this, he begins his dream to challenge the Unova League to become its newest Champion by striving to never give up and always taking the challenge whenever seen difficult.

Nate has messy dark brown hair and brown eyes. He wears a red tennis visor instead of a hat unlike previous male characters, and also a blue short-sleeved jacket with baggy beige shorts and a dri-fit swim suit underneath his exterior outfit. He wears red and black sneakers with white laces, and carries a white messenger bag.

Nate has no distinctive personality, a trait shared by most protagonists in the Pokémon games. Unlike most other protagonists, Nate has speaking lines, thought this usually only occurs when he's being filmed for a movie. 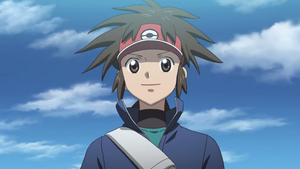 Nate in the animated trailer