Help Patrice and Crazy Dave to defeat all the zombies and Dr. Zomboss from their evil threats.

Nathaniel Timeley, or simply known as Nate, is one of the main protagonists of the comic book of Plants vs. Zombies. He is an 11-year-old adventurer along with his friend Patrice and Crazy Dave.

Nate is a kid that has brown hair, he wears a red and white shirt with green shorts and a pair of green and red shoes.

Nate is portrayed as a natural thrill-seeker at heart who loves any sort of adventure, be it an imaginary one in his treehouse or a real one battling the zombie horde. He is very excitable, reacting very strongly to things he likes, but is not too bright, especially compared to Patrice. He is also described as very intelligent such as being a strategist to fight the zombies. However, sometimes he prefers running away instead of fighting them. 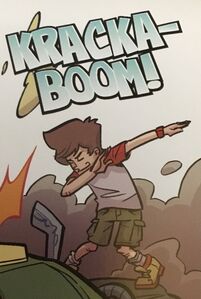 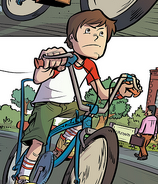