Member of the Samurai resistance

Recording events in his journal.

Formerly drowning his guilt in alcohol.

Punish himself for his guilt over being involved in Colonel Bagley's atrocities (formerly).

He was portrayed by the legendary actor Tom Cruise, who also portrays Maverick, Ethan Hunt, Jack Reacher, and Nick Morton.

He is a Civil War and Indian Wars veteran haunted by the massacre of Native American civilians at the Washita River. Algren was born in Sweden but is a naturalized American. Following a dismissal from his job, he agrees to help the new Meiji Restoration government train its first Western-style conscript army for a hefty sum. During the army's first battle he is captured by the samurai Katsumoto and taken to the village of Katsumoto's son, where he soon becomes intrigued with the way of the samurai and decides to join them in their cause. He also falls in love with Katsumoto's sister, Taka.

Eventually, Algren joins the Samurai's cause in full and helps them battle against the Japanese army forces led by both Omura and Algren's old nemesis Colonel Bagley. Unfortunately, though the Samurai prove to be far more dangerous than Omura and Bagley thought, the superior numbers and firearms of the Japanese army ultimately overwhelm the Samurai, and by the end of the battle, only a handful of survivors remain, Algren included. Gathering them up, Algren leads them on a noble but doomed ride against the imperial forces, managing to kill his hated enemy Bagley before the Imperial Army unveils Gattling Guns that annihilate the remaining Samurai, leaving Algren as the only survivor.

Telling the Emperor what has transpired, he convinces him that the Samurai were right and that Bushido must be maintained. Afterwards Algren returns to Taka to live a new life with her.

Throughout the movie Algren's journal entries reveal his impressions about traditional Japanese culture, which almost immediately evolve to admiration. The character is played by Tom Cruise and inspired by the French officer Jules Brunet. 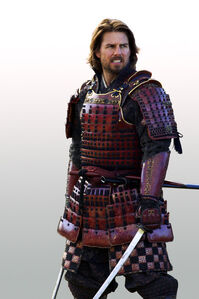 Algren in his Samurai armor. 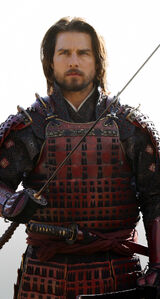 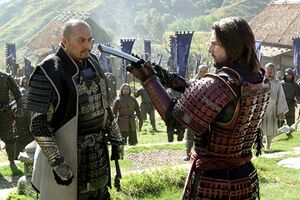 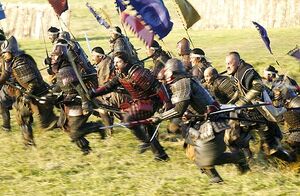 Algren leads the Samurai into battle. 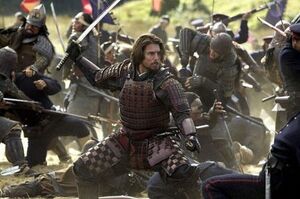 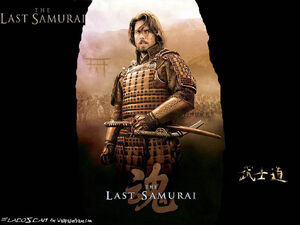