No information
Nathaniel Adams is the main characters introduced in Yo-Kai Watch 2: Ganso and Honke. He is a mysterious kid from 60 years ago, who fights Kaima Yo-kai and is Nate's grandfather.

He is voiced by Romi Park who is best known voicing as Ken Ichijoji, Edward Elric, Temari in Japanese Version and Meyer DeLeeuw in English Version.

Nathaniel's appearance has an uncanny resemblance to Nate's, due to the latter being his grandson. Unlike Nate, he has tanned skin and wears a white tank top, beige shorts, a blue cape and wooden two-teeth geta sandals. He also wears a necklace with an orange charm.

Nathaniel is a very determined and confident kid who is obsessed with a superhero from a manga, Moximous Mask. His goal is to be the equal of Moximous Mask and often practices how to act like Moximous Mask. He often acts rude and distrusting to others, but is most likely to warm up to them and act the complete opposite.

Nathaniel is agile and strong. He uses a wooden club to fight Wicked Yo-kai. He also has a sharp mind, being able to identify disguised Wicked Yo-kai who infiltrated the Bony Spirits and Fleshy Souls armies in order to sparkle further animosity between the two sides.

Nathaniel is impressed by Nate's resolve and abilities enough to trust him with the Yo-Kai Watch Model Zero. Likewise, Nathaniel is eager to teach him his battle dance and pose, which Nate gradually leans. It is later revealed he is Nate's Grandfather, who passed away some years before his grandson was born.

Nathaniel is agile and strong. He uses a wooden club to fight Kaima Yo-kai. He also has a sharp mind, being able to identify disguised Kaima Yo-kai who infiltrated the Ganso and Honke armies in order to sparkle further animosity between the two sides.

Prior to the series, Nathaniel found a crystal marble along the riverside of his hometown, Harrisville. By peering into the crystal, Nathaniel discovered the world of Yo-Kai, ending up helping and befriending various Yo-Kai in need. The experience inspired him to make plans for a prototype that would become the Yo-Kai Watch.

However, these plans caught the attention of Dame Dedtime, who sought to take over the world and wished to prevent the collaboration of humans and Yo-Kai. To this end, she had her underlings Kin and Gin Inspirit two local bullies and harass one of Nathaniel's weaker friends. Despite a prior promise to defend his friend, Nathaniel became overcome by fear and failed to do so, causing his friend to lash out at him for breaking his promise. Severely demoralized, Nathaniel resolved to push away everyone around him, rejecting both people and Yo-Kai and abandoning his plans for the Yo-Kai Watch.

In the future, this resulted in Nate's Yo-Kai Watch disappearing, necessitating Nathaniel's Yo-Kai friend Hovernyan to find Nate in the future and bring him sixty years into the past. Although initially rude towards Nate, Nathaniel eventually warmed up to him after Nate (albeit reluctantly) agreed to play the role of his sidekick.

In order to rescue Jibanyan after he was captured by Dame Dedtime's minions, Nathaniel assisted Nate in mounting a rescue operation. With his courage and willingness to associate with friends restored, the Yo-Kai Watch manifested on both his and Nate's wrists, allowing them to call on all the Yo-Kai friends they made and defeat the Wicked Yo-Kai.

Nathaniel gave Nate his Yo-Kai Watch Model Zero, deciding to build his own and leave his future grandson with a memento of their time together. By Nate's present, Nathaniel had passed on and turned into the Yo-Kai, Moximous N.

Nathaniel's role in Yo-kai Watch 2 is very similar to M01. He first appears in Chapter 5, in which he saves Whisper after he has been inspirited by a Wicked Yo-kai, by clobbering him repeatedly with his club. Upon meeting him in his secret base, where Hovernyan explains the situation to him, he simply claims he has no friends.

On his notebook, Nathaniel planned to create the Yo-kai Watch by using three parts found in Old Springdale, a Mysterious Marble, given by Nick Nack in Springdale Ironworks; a Swirly Bell, given by Komajiro in Mt. Wildwood Shrine, and a Top-Notch Watch, given by Mr. Goodsight in Timers & More. In Chapter 6, Nathaniel finishes the development of the Yo-kai Watch Model Zero and gives it to Nate. When asked by Hovernyan why he would not use it himself, Nathaniel states he has no Yo-kai friends and he won't make another watch, insisting he would fight alone. This is proven somewhat untrue, as Hovernyan shows Nate some milk bottle tops with the names of Pallysol, Faux Kappa, Gnomey, Predictabull, and Mermaidyn written on them, along with their locations. These Yo-kai fought along with Nathaniel to protect the village, and now they are petrified. After Nate de-petrifies and befriends all those five Yo-kai, Nathaniel, while training, recalls his traumatic experience of not being able to defend his human friend. Later, after Nate defeats Kin and Gin for the first time, Nathaniel rushes to the heroes' aid, and when the situation seems helpless, his Classic Yo-kai friends appear and, along with Hovernyan, drain the evil twins' energy, allowing Nathaniel to strike them down. After this, Nathaniel attempts to train Nate.

In Chapter 8, after the war between the Bonies and the Fleshies goes to a ceasefire, Nathaniel appears and uncovers the Wicked Yo-kai which were posing as normal Yo-kai in order to sparkle the conflict between both armies. In Chapter 9, Nate, Nathaniel, and their Yo-kai friends decide to go search for Master Nyada, and Nathaniel and Hovernyan head to Galeria Boulevard. Here, they don't notice Master Nyada at first, while watching Moximus Mask' TV show with him; however, everyone (except Whisper) find him and try to explain him the situation, but Nathaniel gets annoyed when the cat Yo-kai sleeps and sets off.

In Chapter 10, Nathaniel and Hovernyan reach the Industrial Zone where Dame Dedtime and her minions lurk. While Nate and Hovernyan tries to convince Nathaniel about to call for help from the Bonies and the Fleshies, Nathaniel simply scoffs at it and rushes in alone, in which Hovernyan later follows him. Here, Nathaniel and Hovernyan fight Kin and Gin while Nate and his friends decide to stop Dedtime. After Dedtime recovers herself, Nathaniel and Hovernyan are being worn off from his own struggle with Kin and Gin. When Hovernyan gets struck by one of their attacks, Nathaniel laments his perceived foolisheness and powerlessness, to which Hovernyan reassures his selfless actions make him a hero and shows the Milk bottle tops which he was trying to get up. Nathaniel, with newfound courage, calls upon the Classic Yo-kai to be friends; as if on cue, the Yo-kai Watch Model Zero goes from Nate to his wrist and the Milk Bottle Tops change into Classic Yo-kai Medals, which he uses to summon his friends and, along with Hovernyan, battle and defeat Kin and Gin. Finally, both heroes confront and defeat Dame Demona for the last time. Afterwards, Nathaniel parts ways with Nate in gratitude. 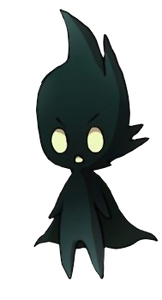 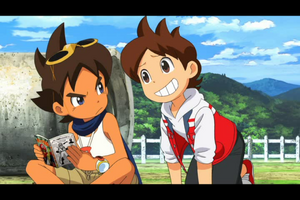 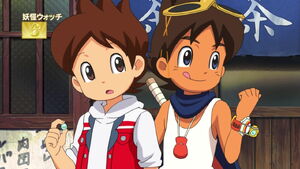 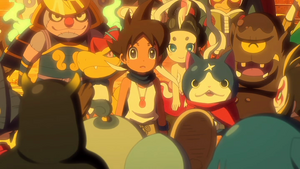 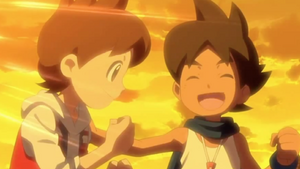 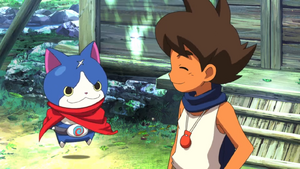 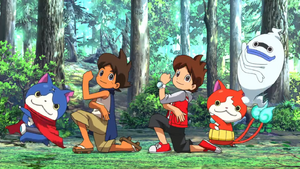 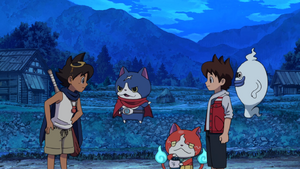 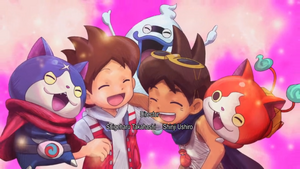 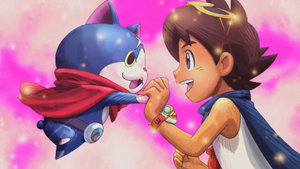 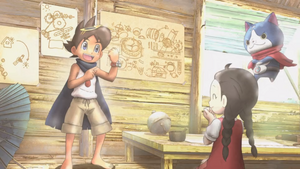 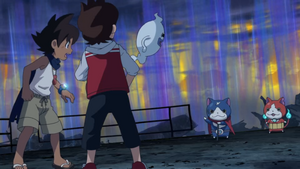 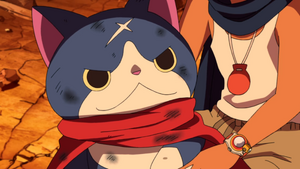 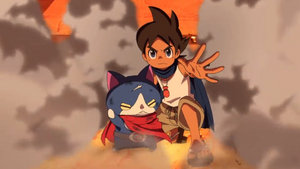 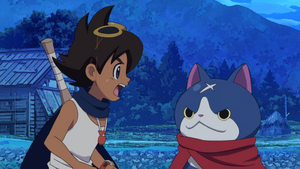 Retrieved from "https://hero.fandom.com/wiki/Nathaniel_Adams?oldid=2023855"
Community content is available under CC-BY-SA unless otherwise noted.