Natsu is a smart and outspoken girl seen by many of her schoolmates as a sister figure. With a sharp personality, she dislikes liars and people who bully the weak. And because she acts more of a man than a girl, many boys in school are afraid of her, but her female schoolmates almost inundate her with love letters every day. Although many see her as boyish, she is an excellent cook and has the heart of a girl who longs for true love... which is probably why she likes the fact that she knows a guy who she argues with almost everyday... Shoma. She also has a fear of bugs that scares her to death.

Natsu has short-length dark blue hair with long fringes and black eyes. Her primary outfit is a red long sleeve collar shirt with a white spiral design on her shirt with a Gorin emblem on her left chest, dark red belt and red (in the first game, they are leotard in-game) short shorts. She wears white wristbands on both of her hands, matching red and white kneepads, red socks and white sneakers with red linings and red and white-collar. 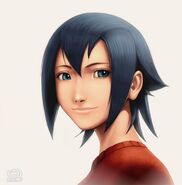