Cute on the Outside

Natsuki is one of the five main characters, as well as the overall tritagonist in Doki Doki Literature Club!. She is Yuri's best friend and former rival. She is the tritagonist in the game's Act 1 and Act 4, and the deuteragonist in Act 2. She is also one of the three characters for whom you can write poems. She is introduced to play off the trope of small-but-feisty tsundere girl, as discussed by Monika in Act 3.

Natsuki has pink hair and rose pink eyes. She also has a bow-shaped hairclip at the right side of the front of her hair, and two red ribbons forming two small twin-tails. The rest of her hair is short and she has small bangs to the side of her face along with small locks of hair on her forehead. Natsuki wears the traditional school uniform just like the other characters for the majority of the game. If you choose her path on Day 3, she will wear a light pink ruffled skirt with a black trim, a white shirt with short sleeves decorated with a light pink cat face and trims along the edges of the sleeves. Under the shirt, two black bra straps can be seen.

She is the shortest character in the Literature Club, a feature that results in people commonly mistaking her for a first year. Her short stature is suggested by the protagonist to be because of her being younger than the rest of the cast but implied by Monika to be from malnourishment.

Natsuki is a brash, blunt, seemingly arrogant girl with a cute, softer interior as a result of insecurity. While she is impulsive and can speak without thinking, Natsuki truly cares about her friends and, even when she has obvious anger issues, doesn't enjoy fights or arguments with people. Over the course of the game, we see that she worries about Yuri and on one occasion, gives the protagonist a note asking him to help Yuri, fearing that if she spoke out then it would cause more arguments.

Her cute interior also involves a love of manga, particularly those in the slice-of-life genre, and baking. She has been known to store her manga collection in the Literature Club out of embarrassment, and while the rest of the club obviously knows about her interest, she is still hesitant to talk about it. Natsuki also likes cute things, like cupcakes with cat faces. She also likes poems with cuter, happier words, though her own poems are still about sad things, such as being persecuted for your hobbies. Her simplistic writing style puts her at odds with Yuri.

Natsuki dislikes being called cute, even when she acts as such, or does cute things, and will deny any claims from others relating to this. Nevertheless she is much more comfortable exposing her sweet side once she knows people aren't going to tease her about it. Natsuki hates it if she isn't taken seriously, whether it's her writing, her hobbies, or just her overall demeanor. It is likely Natsuki learned to be ashamed of herself and her hobbies, because her classmates judge her and her implied abusive father, making her abrasive nature a coping mechanism.

Initially, Natsuki is cold and not receptive to the main character. However, she begins to be more open and emotional with him as time passes.

While playing her route, Natsuki reveals her friends just think manga is for kids, and that she can't even bring it up without them being all like 'Eh? You still haven't grown out of that yet?' It made her want to punch them in the face.

Natsuki, uniquely, doesn’t seem to have any of her own problems and never meets a grisly end. However, hints are given throughout the story which suggest that her home life is troubled and that she struggles with a neglectful and potentially abusive family, including the ninth special poem and her edited comment in Act 2 about how her "dad would beat the shit out of [her]" were he to find her manga.

In Act 2, if the player’s poems have appealed to Natsuki the most, Monika notes that the way to gain her affection is to have a snack at hand. She elaborates, saying that her father doesn’t give her lunch money or leave food in the house, guessing that this is the cause of her small stature.

Natsuki’s last appearance in Act 2 is when she walks in on Monday to find the player next to Yuri’s corpse. She vomits, runs away, is deleted offscreen by Monika and is not seen again until Act 4. 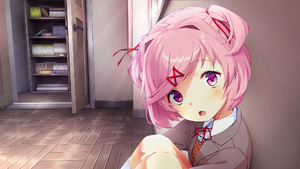 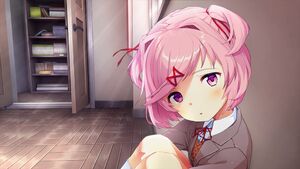 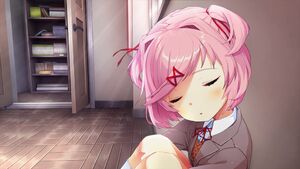 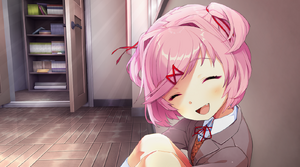 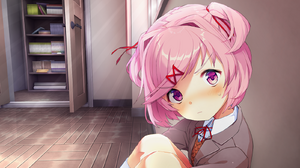 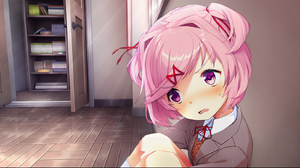 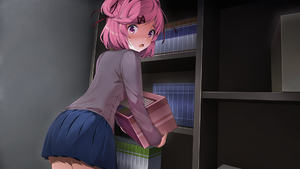 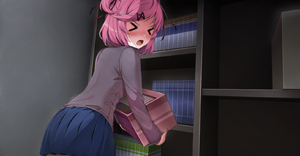 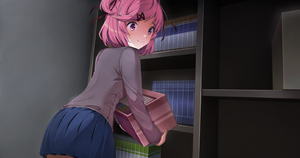 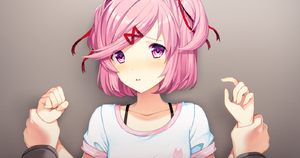 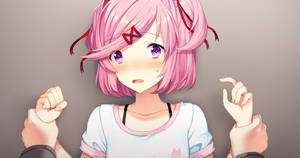 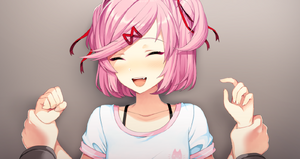 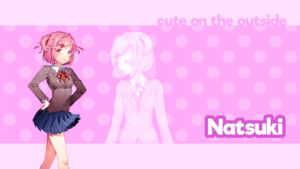 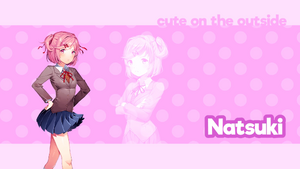