The Legend of Zelda: Oracle of Ages

Singing to the animals in the forest.

Playing the Harp of Ages.

Nayru, also known as the Oracle of Ages is one of the main characters in the Oracle Series, but plays a primary role in The Legend of Zelda: Oracle of Ages. She is well-known as the singer of Labrynna and the oracle that watches over time and history. Nayru is a peaceful and graceful young woman, in contrast to the energetic and lively Din, who hangs out in the forest clearing, singing to the animals, who are entranced by her angelic voice.

Nayru is fair-skinned with long blue hair and blue eyes. For clothing, she wears a sleeveless sea blue flowing top with the left side longer than the right with a gold hem that secures it, and a light blue long skirt with the right side longer than the other. She also sports blue sandels which is a standard blue at the top and pale blue at the bottom. For jewelry, she wears a golden necklace and gold armbands on her upper arms with light blue frills, and a gold headpiece on her forehead.

Nayru is first seen in the Forest of Time with her friend Ralph and the bystanding animals who listen. Link and Impa arrive and Nayru greets them and Ralph also introduces himself, but lets Link know that he doesn't need his help protecting Nayru. After a short conversation, Impa is revealed to be possessed by Veran the Sorceress of Shadows, who tricked Link into moving the rock that would keep evil forces out. The sorceress proceeds to possess Nayru, which made Ralph threaten her, but Veran reminds him that it would be Nayru who will be seriously hurt making him back down, and creates a Time Portal to change history to her liking. As a result, everything affected in the past begins to affect the present. Link and Ralph quickly chase her through the portal and the latter vows to save Nayru himself.

In the past, Veran (as Nayru) managed to manipulate Queen Ambi into ordering everyone construct a tower that reaches the heavens nonstop and proceeds to destroy her fatal weakness, the Mystery Seeds, so she would remain unopposed. Meanwhile, Link has the mission to collect the eight Essences of Time to help the Maku Tree recover her memories and open new areas across Labrynna. After Ralph notifies Link that Queen Ambi had left the palace, they seize the opportunity to confront the possessed Nayru. There, Link manages to drive Veran out of Nayru's body with Mystery Seeds from the Seed Shooter. When Queen Ambi came back, she soon falls under Veran's influence and Nayru takes them back to the present and she teaches Link the "Song of Ages".

Later, Link gathers all eight Essences of Time which restored the Maku Tree's memories and the Maku Seed is produced which breaks the curse on Ambi's Palace, now known as the Black Tower. Link then confronts Veran and removes her from the queen, revealed to be Ralph's ancestor. Link defeats the evil sorceress and restore the flow of time and its original history to its normal state. Nayru is seen singing to the animals with Ralph at her side during the ending sequence. During a Linked Game, Nayru, alongside Din, teleports Link to the Room of Rites for the true final battle against Twinrova and Ganon.

Nayru reappears alongside Din and Farore at the Happy Hearth Inn and is looking for a place to call home in Hyrule Castle Town. If she is given a house to live in, she will grant Link Nayru's Charm which will temporarily reduce damage he receives. 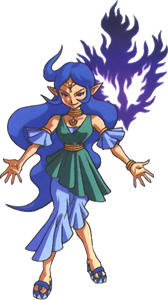 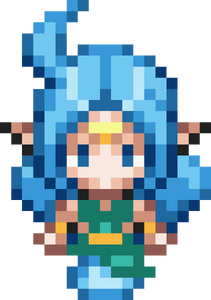