The Church of Necessary Evil

Quell and suppress any presence of magic and magicians throughout the United Kingdom, Maintain peace and security worldwide, Investigate and stop corrupt & rogue magicians, Stop the Roman Orthodox Church from destroying Academy City and taking over magic and beliefs

The Church of Necessary Evil or Necessarius (必要悪の教会ネセサリウス Hitsuyōaku no Kyōkai (Nesesariusu), lit. "Church of Necessary Evil") is an international security organization and is the main magic side protagonist faction of the A Certain Magican Index series. It is the 0th Parish of the English Puritan Church and serves on behalf of both the Anglican Church and the British Royal Family with the intent of supressing the presence of magicians and magic all throughout the United Kingdom. Members of Necessarius make up the vast majority of Touma Kamijou's allies and are often seen fighting on his behalf and are the de facto magic side protectors of Academy City.

During the early days of England, the English Puritan Church was at odds with magicians all throughout England and as a result, they had staged countless Witch Hunts, Heretic Hunts, and Inquisitions all throughout the country. This was due to the fact that England (and the United Kingdom in the future) is a magical country and there was a strong anti-magician culture in the country at the time. In an effort to stop magicians in all of England, the Puritan Church had created the Church of Necessary Evil (Nessarius for short) as its 0th Sector and became the Puritan Church's special division. Necessarius was then formed to supress magicians all throughout England while at the same time, their members were becoming magicians themselves.

Despite their best efforts to supress magicians in all of England, the Puritan Church had viewed Necessarius very poorly primarily due to the fact that its members were all using magic and the organization itself was made up entirely of magicians themselves. This caused the Puritan Church to kick them out of Canterbury Cathedral and move them to Saint George's Cathedral in London where it became their new and current headquarters. Due to the church's donations and contributions from behind the scenes, Necessarius was able to create a better profile for itself and the organization and was even able to form a form of power from within the church leaving St. George as the true de facto capitol of the Puritan Chruch where all chruch policies are made at and left Canterbury Cathedral as a figurehead and symbolic rulers.

In 1947, Necessarius and other collaberators who were connected to magic had teamed up in an effort to assassinate Aleister Crowley. This was done once he announced his plan to effectivly give up on magic and focus more and science and technology and start all over again. Once his fake death was released, all of his assets were recieved and taken in by the Anglican Church. Eventually, the Anglican Church had established the Index Librorum Prohibitorum in an effort to counter, reverse-engineer, and possibly eliminate magic in the entire world. It was created with help from the Roman Orthodox Church and soon over 103,000 Grimoires from the Roman Church's Book of Laws. Eventually, Laura Stuart had assemded to power and took over the entire Anglican Church and Necessarius at one point in time. Eventually Index made it to Academy City and ran into Touma and through a long series of events, Necessarius would turn into an ally of Touma as they try to stop and prevent the Roman Orthodox Church from taking over the city and conquering the Science Side.

Like the English Puritan Church, Necessarius is unique in that it is able to have various different factions and sects be united under its control as part of one big organization. Necessarius is more liberal when it comes to the diversity of factions and sects under its control and how their varius sects/subordinate organizations belive in general. In fact, according to Motoharu Tsuchimikado, the English Puritan Church is the most complicated organization/Christian sect in the entire world because of the various factions and beliefs that they have under their banner. While tensions between the varius factions may rise on occasion, ultimately, the Puritan Church will be able to benefit from the various belief systems and keep the factions together.

Necessarius is an organization that deals primarily with international manners. Their members are often sent across the world in order to deal with various corrupt, rogue, and/or fanatical magicians that may cause harm if not stopped and send out their best members and magicians in order to stop them. Usually, this puts them at odds with the Roman Orthodox Church which seeks to dominate all other belief systems including other sects of Christianity and thus the two are at a state of war because of this and their members will often face and fight each other frequently because of this. Necessarius is a master at torture, inquisitions, and heretic hunts as seen in the past and is known to have impressed Agnese Sanctis who claims that despite the fact that their trials are hosted by cardinals, they are mere games as compared to that of Necessarius. Even Stiyl Magnus has admited that both churches have different forms of torture. Prisonors of Necessarius are sent back to the British capitol of London where they are imprisoned in the Tower of London where they are interrogated. Notable victims include Lidvia Lorenzetti and Biagio Busoni of the Roman Church.

The English Puritan Church is also specialized in inquisitions and anti-magic operations stemming from its early days. Following its foundation, Necessarius was tasked with clensing England of Magicians that had ran rampant during its early days. However, in order to acomplish such a task, all Necessarius members had became magicians themselves resulting in Necessarius becoming both a religious and a magical organization at the same time. Many people use this unique feature to their own advantage like Laura Stuart, the Archbishop of the Puritan Church and current acting Leader of Necessarius, as she has used the church and both her and its power to her own needs and acomplish her goals. Stiyl often serves under her but does it so he can prevent her from abusing Index.

Necessarius is an international military/magician organization and will often use it as a means of diplomacy for the Anglican Church. It is easily assumed that Necessarius maintains positive relations with most foreign countries in order for their operations to be launched and their personal deployed to several foreign nations. They appear to have an alliance between them and Academy City as many churches are allowed into the city such as the Roman Orthodox Church which had deployed the Thirteen Knights of the Roman Orthodox Church to deal with Aureolus Izzard, a rogue alchemist and defector towards the Anglican Church. The English Puritan Church and Academy City however share the strongest alliance between each other as compared to the other churches. This is due to a treaty signed between Archbishop Stuart and Academy City's leaders after Touma became the keeper of Index which allows them to get aid, resources, and even gifts from the city such as a washing machine to its female members.

Necessarius appears to have no ceremony or ritual for a person who seeks to become an official member of the organization or one of its affiliations. As noted when Agnese Forces decide to join the English Puritan Church and Necessarius, they are signed in as members of the Roman Catholic Church London Branch once they agree to join and the Amakusa are also part of Necessarius despite not converting to Anglican Christianity. According to Stiyl, Necessarius was presumably much more tense in terms of membership status before Touma became affiliated with the organization through Index where recruits had killed each other in the past in order to become members prior to beig abolished. Its also stated that Necessarius operated more like a Magic Cabel as while the overwhelming majority of its members are Anglican Christians, many of them are not and only join just to accomplish their personal goals.

Continuing with the fact that Necessarius is also a magic organization along with a religous one, members of Necessarius aren't made into joining the clergy as seen by Sherry Cromwell, who is a member of Necessarius but isn't a nun and doesn't have dress codes made for either male or female members forced upon them. Presumably, members are allowed to use their cloths to reflect their powers and thus are allowed to have whatever attire they please. Necessarius Members are also given separate lodges for both genders having seperate dorms and special cases with the Amakusa having a base in the Japanese Street of London and Lambeth Palace as the official residence of the Anglican Archbishop but can go to St. George's Cathedral if needed. In the past, those seeking to become members had to go down to training facilities in the subway stations of London and be stuck in a room and have to craft food and water out of magic in order to survive. This became too dangerous however so it was shut down and Necessarius adopted a much looser system in terms in membership.

The girls of Necessarius in their Academy City residence

The Amakusa-Style Remix of Church 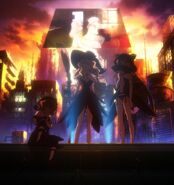 The witches of Necessarius
Add a photo to this gallery

Retrieved from "https://hero.fandom.com/wiki/Necessarius?oldid=1680404"
Community content is available under CC-BY-SA unless otherwise noted.