Escape from the Illuminati.

Fend off Illuminati agents sent after him and Effie.
Cherish and live in his newfound freedom with Effie.

Necro is one of the heroes from the Street Fighter series.

Necro used to be an ordinary boy named Illia (Илья́ in Russian), living in a small village in Moscow in a country which was then known as Union of Soviet Socialist Republics (USSR for short). When USSR collapsed and faded into history, hard times fell upon vast majority of Russians and Illia's family was no exception. He began to seek a better life and met Gill and his organization, the Illuminati. Illia was promised a better life, but Gill tricked him into an experiment. Illia's body and DNA were altered, enabling him to stretch his limbs and generate electricity from his body. The price of his power is to make him look like a mutant. A cybernetic computer implanted in his brain also improved his combat ability.

Illia, now known as Necro, entered the third Street Fighter tournament. He at one point dreamed of rising to the top as a member of the Illuminati, but after numerous repeated experiments and their end results Necro eventually realized that he is nothing more than a disposable guinea pig. Necro saw the tournament as a way to recycle his freedom and retaliate against Gill. However, Necro was deceived again because Gill got him into trouble and was tied to the base that was about to be destroyed. However, Necro's companion Effie managed to save him and they managed to escape.

After escaping, they first tasted freedom, but Gill’s organization is still tracking them. Even though deemed a failure in the eyes of Illuminati, Necro as an experimental subject is still a top secret being that contains classified genetic and biological engineering materials in his body and thus Illuminati can't permit Necro to roam freely.

In SF3: Third Strike, Necro eventually comes to term with his altered body during his desperate escape against the Illuminati, with Effie in tow. During the escape Effie ends up falling from a great height and Necro used his elastic arms to save Effie's life. For the first time ever, he felt grateful to his body. 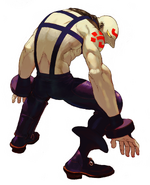 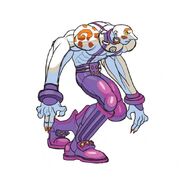 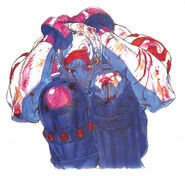