Heroes Wiki
Register
Don't have an account?
Sign In
Advertisement
in: League of Legends Heroes, Hybrids, Female,
and 23 more

Member of the Vastaya Tribe

Having fun
Searching for others to help her start her tribe.

Start her own tribe (ongoing).

Neeko, also known as The Curious Chameleon, is a heroic playable champion from the MOBA game League of Legends. She's an energetic and optimistic young chameleon with the ability to shapeshift into anyone she pleases.

Neeko originated from a long lost tribe of vastaya. However, one day, the island that she and the rest of her kind lived caught on fire, resulting in everyone dying. However, the village elders sacrificed themselves so that Neeko could escape. After some time, Neeko ended up near Ixtal, where she met Nidalee and even developed feelings for her (although they were unrequited.) However, Neeko eventually decided that she wanted to start a tribe of her own, so she left Ixtal in search of other like-minded people.

Neeko is a young girl who wears a tank top with beads accompanied by a pair of feathers on both straps (the left strap of which droops over her arms rather than her shoulder) and a loincloth held by a belt made of stones. Her eyes are yellow with noticeably vertical pupils. Part of her pink and purple hair is arranged at the sides of her head while the rest of it hangs by her neck. She has many patches of green skin while her fingers are blue, purple and pink. She wears a blue necklace and has a tail. She always seen barefoot with orange cuffs around her ankles. 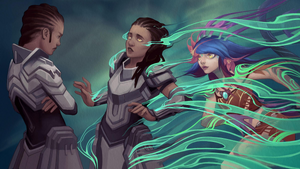