Professional Lifeguard
Neely Capshaw is a character from the television show Baywatch.

Neely was (mainly) portrayed by actress and model Gena Lee Nolin in the TV series and a few TV movies.

Neely was born in Los Angeles, California to an upper middle class family. She had one unnamed sister who suffered from manic depression. Her parents were always working and had little time or interest in their children.

Neely's family did not trust her as she was considered deceitful and a spoiled whiner.  To appease her parents Neely got a College education but that did little to improve their relationship. Even if Neely wasn't close with her parents she had managed to win over a rich aunt who provided her everything after college, for a time at least. Eventually Neely had to get a job and she ended as a lifeguard as she was under the impression that it was easy and fun.

In the beginning Neely was a cruel, selfish, manipulative and conniving woman. She was uniformly disliked by the other lifeguards; even C.J. who liked everybody detested her. Stephanie had her hands full to deal with Neely.

Neely had an alcohol problem and was caught drinking on the job.

Neely's attitude and ethics changed eventually and she even began showing selflessness, kindness and caring. These changes were, however, only temporary and Neely soon returned to her evil ways.

Neely was a tall, athletic woman with long blonde hair and blue eyes. Just like C.J. Parker, Neely was a sexy head turner, something she was well aware of and she was not shy to use her looks to manipulate people.

Neely (Gena Lee Nolin) was both taller and heavier than Stephanie Holden (Alexandra Paul), while her figure was more akin to C.J. Parker (Pamela Anderson). She was 179 cm tall but her weight varied a lot through the seasons, ranging from 58 to 66 kg (128 to 145 lb). The weight fluctuations were the result of Hashimoto's thyroiditis that Gena was suffering from at the time. Her supposed measurements were 35C-24-34.

Neely was 24 years old when she was introduced in season five.

Neely was a physically strong and athletic woman with a sharp mind. Unfortunately, her talents were often wasted on jealousy and nasty schemes. Her people skills were outright horrible and she often caused strife, even when not actively trying to do so.

Despite her faults, Neely was an excellent lifeguard; when her mind was on the task her performance was on par with the best of the Baywatch lifeguards including C.J. and Mitch Buchannon. She was a strong swimmer and runner – fast both on land and in the water. Thanks to her physique she was able to perform tough and demanding rescues. Without doubt, Neely was one of the fittest lifeguards on Baywatch, never shying away from exercising. Just like C.J. her daily training regimen included weight training and for cardio she seemed to prefer running.

Neely and Stephanie also acted as Cody Madison's swimming coaches for the Olympics.

In the epsiode Let the Games Begin (S07E08), to prove she was just as tough as the men, Neely demanded to be allowed to compete in the men-only Uncle Toby's International Ironman Competition, the toughest lifeguard competition in the world. With only a day's preparation she earned one of the four spots that had been reserved for Team Baywatch, beating all the other Baywatch women and men except for Mitch, Newmie and Cody (C.J. Parker did not participate). She then competed as the only woman and did remarkably well – after the swimming, running, paddle and ski legs, just before the final running leg, Neely was still neck to neck with the top contenders. Unfortunately only the two first contestants were shown to cross the finish line, so Neely's placement remains a mystery. Never the less, Neely proved that she is among the five toughest Baywatch lifeguards.

Only two episodes later, in Search and Rescue (S07E10), Neely's lifeguard rescue skills and athletic prowess were once again displayed when she competed and won a place in an elite search and rescue team consisting of three lifeguards and three firefighters. This time it wasn't just about physical ability but also about rescue skills and Neely showed once again that she's one of the best lifeguards in Baywatch.

Neely was proficient in all the land and water vehicles the lifeguards used, including the Baywatch trucks, the quad bikes, the Scarab boats and the jet skis. 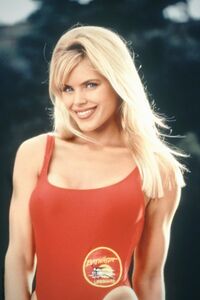 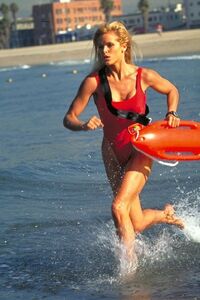 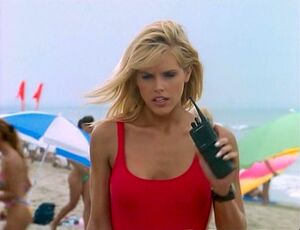 Gena Lee Nolin as Neely Capshaw on Baywatch Season 7
Add a photo to this gallery
Retrieved from "https://hero.fandom.com/wiki/Neely_Capshaw?oldid=2275080"
Community content is available under CC-BY-SA unless otherwise noted.