Neera Li is the Royal Magister's advisor and the chief of the STPD and is one of the supporting characters in Freedom Planet.

She is also one of the main protagonists of the upcoming sequel, Freedom Planet 2.

At first, she was very distrusting of Lilac and her friends, but after all the suspicions were cleared up, she became less doubtful and aids them in defeating Lord Brevon and his army. In the two years after, Neera joins Team Lilac to assist them in their training and guide them on their missions.

She is voiced by Ashlyn Selich.

Neera is a strict law enforcer who enforces the Magister's will and aids him, with the aid of her frost art skills and her ability to summon shields at will. She is skilled with using spears, and appears to accompany General Gong a majority of the time. Neera takes a very proactive role in her work, growing skeptical of how Lilac and Carol knew about the attack on the Ancient Temple and going so far as to do a background check on the two. However, she is not a machine obsessed with duty; recognizing Milla as a child and that she is simply guilty due to being an accomplice, also stating that it's dishonorable to hurt small children, showing that she has a sense of honor.

Not much is known about Neera. However, she used to serve Dail and his father as the Royal Priestess of Shuigang. But she fled to Shang Tu after the King's death and Dail's corruption. Since then, Neera often works alongside General Gong, such as protecting the Ancient Temple and the Kingdom Stone within, until Zao forces invade the Temple and steal it. It is also likely that she was appointed by the Royal Magister, to be the Chief of the STPD (Shang Tu Police Department).

At some point, travelers reported that something out of common was found at Pangu Lagoon. Fearing that it was radioactive, the place was quarantined until the events of Freedom Planet.

Being warned by Sash Lilac and Carol Tea about the raid to steal the Kingdom Stone, Neera initially didn't believe the girls. After to be proven about the ambush too late, Neera continued her work to protect it, but to no avail. After that, she made a background check about the girls to know more about her "Fortune Tellers", discovering that the Dragon and the Wildcat are former members of the Red Scarves.

With this unexpected discovery, and the suspicion that the girls were involved in the Kingdom Stone's theft, she warned the Royal Magister about them and their evidence, to prove Brevon's existence. On command of the Magister, Neera arrested the team and quarantined both the evidence and Torque, who was involved with the team. However, they manage to flee from the prison and Neera battles the girls, although she failed to stop them.

Returning to the STPD, Neera is informed that the evidence brought by Torque, was examined by Shang Tu's scientists and is similar to materials found in Pangu Lagoon, and the suspicion that it was radioactive was false. With this knowledge and the realization of her foolishness, she gets ordered from the Royal Magister, to look for Lilac and bring her back, use her spunky bravery and courage to explore the area and bring what she can, as exchange the restoration of her honor.

After Lilac's return with a robot explaining the origin of the Kingdom Stone and its purpose for Avalician people, it was decided that they should recover and return it to the Ancient Temple. With the girls in the front lines to recover the stone, Neera and Shang Tu forces worked alongside Shang Mu forces to retake Shuigang from Brevon's dominion. 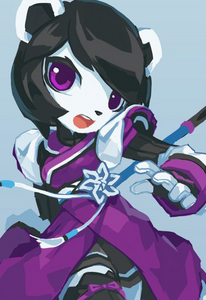 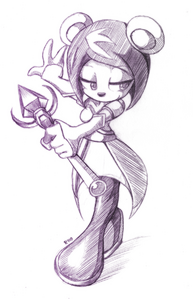 Retrieved from "https://hero.fandom.com/wiki/Neera_Li?oldid=1691123"
Community content is available under CC-BY-SA unless otherwise noted.