Neesha is the supporter of Pokémon the Movie 23: Mewtwo Strikes Back - Evolution.

She was voiced by Ayane Sakura in the Japanese version, and by Lisa Ortiz in the English version.

Like the other trainers, she received an invitation to meet the "Best Pokémon Trainer In The World" at New Island. Because of a storm, Miranda would not let them travel, so she and other trainers used their Pokémon to cross the sea. She used her Dewgong to cross the sea by riding on the Pokémon. Neesha arrived on the island, along with Corey and Fergus. When Ash and his friends arrived at the island, Neesha introduced herself and her Pokémon to them. She watched the others attacking Mewtwo but they failed. Neesha used her Shellshocker against Blastoisetwo but Shellshocker was easily defeated. When Mewtwo tried to capture the Pokémon with the Mewtwo Balls, Neesha tried to protect her Pokémon from them but failed. Later when her Pokémon were freed by Ash, her Pokémon were seen battling their clones while Neesha watched them.

As in Mewtwo Strikes Back, Neesha is a calm and approachable teenaged woman. She carries herself confidently though she doesn't like showing off. Neesha's apparent streak of determination was most evident during her battle against Mewtwo.

The book adaptation, though usually calling her by her English name, refers to Neesha as "Sweet." 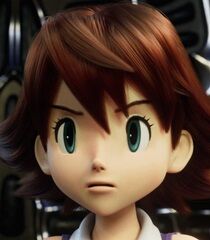