Neewa is the deuteragonist of the 1961 live-action film Nikki, Wild Dog of the North. He is an orphaned black bear who is Nikki's best friend.

When Nikki encounters Neewa, a bear cub whose mother got killed by a grizzly bear named Makoos, Andre ties the two animals together, plops them in the canoe, and heads for the rapids. When the two animals become separated from Andre, the unlikely pair must learn to survive in the wilderness. What is initially a relationship of hate and incompatibility transforms into one of compromise and friendship between species. Encounters with timber wolves, lynx, wolverines, grizzly bears and many other wild animals are vividly photographed and give viewers a real sense of life in the wild. When Neewa begins his long winter hibernation, Nikki sets off alone on a desperate hunt for food. Nonetheless, animal-rights activists and sensitive children alike will find disturbing the shots of steel traps in use, the incident in which Neewa and Nikki almost choke one another with the line that joins them, and the gruesome dog fight scene. 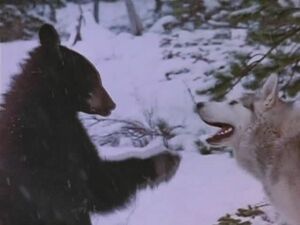 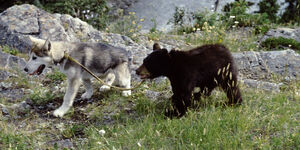 Retrieved from "https://hero.fandom.com/wiki/Neewa?oldid=1712020"
Community content is available under CC-BY-SA unless otherwise noted.