Start a Wiki
Nefertari Vivi is a character from the anime and manga series, One Piece. She is the princess of Alabasta. She is the daughter of Nefertari Cobra and Nefertari Titi. She was one of the main antagonists of the Reverse Mountain Arc under the Baroque Works codename Miss Wednesday, but she ended up traveling with the Straw Hat Pirates for most of the Alabasta Saga after revealing herself to be a spy plotting against Baroque Works. She has not been featured in the main story since the Straw Hats left Alabasta but has occasionally been shown to be keeping track of their progress.

She is voiced by Caitlin Glass.

Vivi has long, wavy blue hair with two locks hanging down, one on either side of her head, which started out at about chin-length but were past her shoulders by her last appearance before the timeskip. She most often wears her hair pulled back into a ponytail. She has a slender body but tends to wear less-revealing clothing than Nami and Robin do. Vivi has been seen wearing several different high heeled shoes, including white high heel boots, white high heel sandals, and blue wedges.

Though she is a princess, she rarely wore clothing that would suggest her royal status while traveling with the Straw Hats, although she started to do so more regularly after her coming-of-age speech.

On the cover of Chapter 640, Vivi was shown after the time-skip. She now wears her hair down but held back by a clip, and it seems a bit shorter than before. Like most female characters since the timeskip, her hourglass figure has become more pronounced.

A notable facet of her appearance is that when she was a member of Baroque Works, she seemed to have been drawn in a slightly different way. While playing the role of Miss Wednesday, she looked older, and her facial features were much more angular. She wore her ponytail in a very high position until she was attacked by Miss Valentine, where a few strands of her hair were slashed off with her hair bead. It was only after she allied herself with the Straw Hats that she was drawn to look more like a teenage girl, with slightly bigger/rounder facial features and a less shapely body. This was more noticeable in the anime than the manga, as the animators drew her in such a different way that she could almost be mistaken for another character.

Vivi does not fit the stereotype of a needy and authoritative princess, never demanding any special attention or prioritizing herself above others. In fact, she usually puts the needs of others far above her own and is hesitant to rely on others or ask for help with her problems. In particular, she places an enormous value on the citizens of her country and the lives of her friends. Vivi's selfless nature could be seen especially when she asked the Straw Hats to make a detour to get medical help for Nami instead of continuing straight to Alabasta, even though she knew her country was in a state of emergency.

She is also extremely brave and determined, going up against powerful enemies for her friends' sake even when clearly outmatched. Her selflessness and sense of responsibility push her to carry her country's burden. She is slow to anger and quick to forgive but fiercely loyal to her friends, her family, and her country.

As a member of Alabasta's royal family, she loves her country and is willing to do anything to protect it, even infiltrating a vast criminal organization. She doesn't mind doing tasks that seem unsuitable for a princess, such as washing dishes.

Vivi grew up knowing that she was responsible for the well-being of her country. As such, she developed a impressive skills as a diplomat. Even as a child, she understood what being a princess meant and acted with wisdom beyond her years: when slapped by Wapol, she apologized for being in his way and held back her tears until he was out of earshot, all for the sake of preventing an international incident. When they reached Drum Island, she was able to persuade Luffy to not attack the villagers and even put on a brave face after being shot in the arm. Her courage convinced the villagers to allow them into the village peacefully.

During arguments, Vivi has a hard time coming up with insults and usually ends up saying something of little offense. She has a habit of giving people nicknames, calling Zoro "Mr. Bushido," She also has a habit of biting her bottom lip when she is worried. Despite her kind and earnest nature, she can be deceptive when necessary. At age fourteen, she was able to infiltrate Baroque Works and, over the course of two years, quickly rose to frontier agent status without anybody realizing her true identity.

A running gag throughout much of the Alabasta Arc was that Vivi constantly forgot to warn the Straw Hats about various dangers of the desert, such as giant scorpions and lizards, until after they appeared. Luffy, Zoro, and Sanji quickly dispatched any threatening creatures but berated her for her inability to remember such things beforehand. 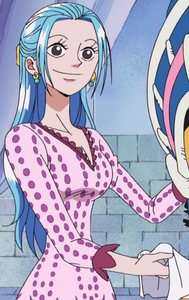 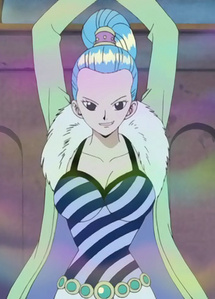 Nefertari Vivi's outfit at the beginning of the Drum Island Arc.

Nefertari Vivi's outfit at the end of the Drum Island Arc.

Nefertari Vivi's outfit at the beginning of the Alabasta Arc. 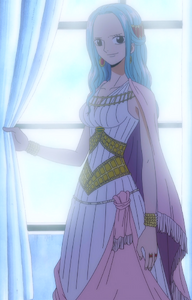 Nefertari Vivi's outfit at the end of the Alabasta Arc.

Nefertari Vivi's outfit for the Levely. 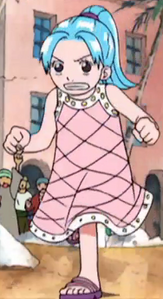 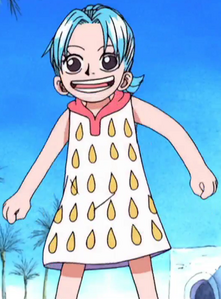 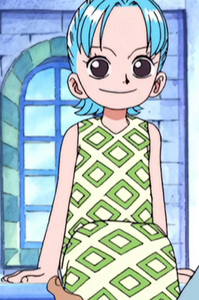 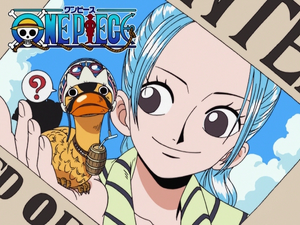 Vivi (and Karoo) in the 1st set of Eyecatchers.

Artwork of Nefertari Vivi in One Piece: Gear Spirit. 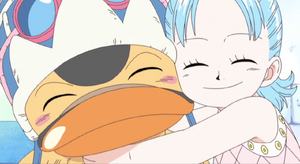 Vivi and Karoo when they were very young. 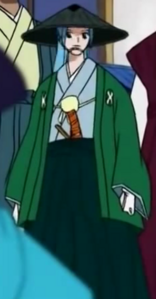 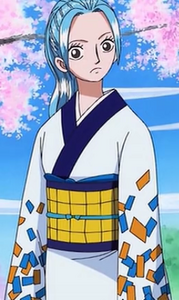 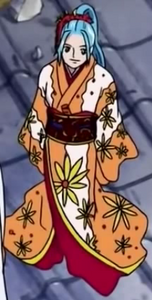 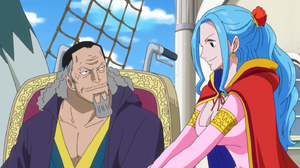 Vivi with her father, Cobra.
Add a photo to this gallery

Retrieved from "https://hero.fandom.com/wiki/Nefertari_Vivi?oldid=1783303"
Community content is available under CC-BY-SA unless otherwise noted.