Negative Man (real name Lawrence "Larry" Trainor), and also known as N-Man or Neg-Man, is a member of the Doom Patrol. He has appeared in numerous cartoon television shows and films.

He was created by the late Arnold Drake, the late Bob Haney, and the late Bruno Premiani.

He made his first live-action appearance as a guest star on the DC Universe series, Titans, played by Dwain Murphy and voiced by Matt Bomer. He is a main cast member on the spin-off series, Doom Patrol, with Matthew Zuk taking over the role from Murphy. Zuk portrays Negative Man's physical form, while Bomer lends his voice to the character and portrays Larry Trainor in flashbacks.

Negative Man appeared in the two-part Teen Titans episode "Homecoming" voiced by Judge Reinhold. Negative Man appeared along with the other Doom Patrol members. He has a sarcastic matter-of-fact attitude similar to Raven's. His 60-second "soul separation" time limit is absent in the series. He did state that he shouldn't spend too much time separated from his body, but didn't give a specific time limit.

However, it is implied that his soul has spent time, caged, outside his body for five months while his body was nearly frozen. Also, while the Doom Patrol was helping the Titans fight the Brotherhood of Evil, Negative Man spent "too much" time apart from his body and while trying to fly back to his body the negative spirit sank into the ground apparently against its will, reaching for its body, leading Beast Boy to assume he was dead, or at least would never wake up from his catatonic state without the Negative Spirit.

Though it was not specifically stated how long the Negative Spirit could remain separated from his body in this appearance, Negative Man's comment upon being released, "You could have at least thawed me out first", implies that his physical body may have been frozen, or in some sort of suspended animation. This may explain how he was able to stay separated for so long without ill effect, especially since this method was occasionally employed during other incarnations of the Doom Patrol when, for whatever reason, the Negative Spirit was unable to return to Larry Trainor's body. 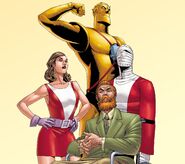 Negative Man with The Chief, Elasti-Girl, and Robot Man.

Negative Man in 2019s Doom Patrol.
Add a photo to this gallery

Retrieved from "https://hero.fandom.com/wiki/Negative_Man?oldid=2205586"
Community content is available under CC-BY-SA unless otherwise noted.