The good looking one,The lucky one

Class of the Titans

Save the world from Cronus

The other Titans descendants

Neil is a hero from the 2000's Teletoon cartoon television show Class of the Titans.

He was voiced by Ted Cole.

He has bright blond hair and usually wears a black and white designer shirt. His underwear has included red briefs ringed with black. His voice is in the high pitch range - most likely an alto. In the first season of the show Neil is 16 years old. He turns 17 in the second season.

His superpower is good luck. This superpower is a passive skill therefore Neil is not able to actively wield or control it. Although the skill may seem useless at a quick glance, it is very powerful when it is in operation. There have been instances where Neil's good luck is what saves the day after Cronus has captured or incapacitated the whole team. As a result of having good luck as a superpower, Neil is the only member of the team not to wield a physical weapon (other than a mirror).

He is a descendant of Narcissus. Just like his ancient ancestor Neil is very self-absorbed. In one episode, Neil is admired by Echo. However, Echo loses interest because she finds out Neil is just too self-absorbed. He really cares a lot about his hair.

He is the main source of comic relief in the show and in some episodes he is the only one left to save the whole team. 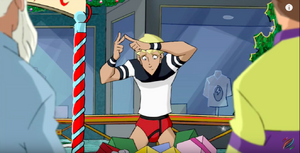 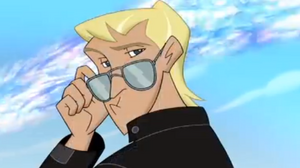 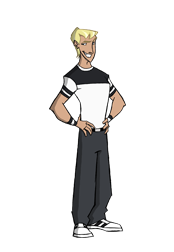 Neil in his usual designer outfit
Add a photo to this gallery
Retrieved from "https://hero.fandom.com/wiki/Neil_(Class_of_the_Titans)?oldid=1712480"
Community content is available under CC-BY-SA unless otherwise noted.