To get out from Killing School Trip. (DR2)

To stop Ryota Mitarai from brainwashing the world with hope. (succeeded)
To atone for his actions as Ultimate Despair. (ongoing)

He was severely injured by Monokuma in Chapter 3 while trying to protect Akane Owari. Monokuma was forced to convert Nekomaru into a cyborg in order to save his life.

In Chapter 4, he and Gundham Tanaka dueled to the death in order to save the other students from starvation. Nekomaru lost and died, becoming the victim of the fourth murder case. But in reality, both Nekomaru and Gundham are still alive.

Nekomaru is a tall, muscular man with black hair. He wears a white tank top under a black gakuran, as well as blue tracksuit pants and sandals. He has chains around his neck with a whistle hanging in the middle part, and emits a blue electric aura from his eyes.

He has two scars running from the top of his both eyes downwards in their own directions. He also has a towel tucked into the back of his pants. Like Peko Pekoyama, he has also been mistaken as a cosplayer due to his appearance.

Nekomaru is a vigorous, boisterous and openhearted boy who is passionate about supporting athletes but suffers from dyspepsia. He frequently shouts when speaking. As a team manager, he is close to his athletes and strives to improve them however he can. Over the course of the story, he takes a keen interest in the athletic skills of Akane and helps her hone her talents as best he can. 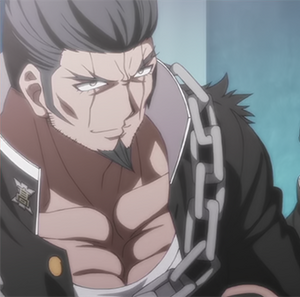