Heroes Wiki
Register
Don't have an account?
Sign In
Advertisement
in: The King of Fighters Heroes, Martial Artists, Fighters,
and 19 more

Nelson (The King of Fighters)

Nelson is a character who made his debut in The King of Fighters XIV.

He is voiced by Kengo Takanashi.

Nelson is a boxing prodigy that lost an arm after a terrible accident, but has been able to quickly return to the ring thanks to advanced robotic prosthetics.

He fights to seize the world championship while hoping his fiancée will someday awaken from her coma. In the past, it is revealed that Nelson is responsible for Tizoc's harsh defeat and the reason for his heel persona, King of Dinosaurs.

In his team ending, his fiancée awakens from her coma. Nelson is completely unaware that the scientists who gave him a cybernetic left arm were responsible for his accident and attempting to use him as a test subject. Before he goes to see to his fiancée, Nelson advises his teammate, Bandeiras, to try and not scare people while advertising his new ninja school in Japan or else he may get himself arrested. 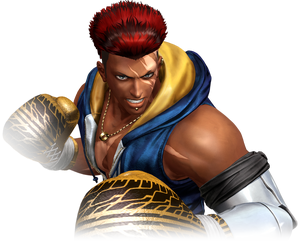