She is voiced by the late Tamaki Nakanishi in the Japanese version, and by Luci Christian in the English version.

Neneko is a cat-loving 9 year old junior detective, who considers everything a mystery. She calls Tomokazu "Darling", and herself, "Darling's wife". Like Mone, she often displays her behind to him. She wears a yellow cap that appears to conceal real cat ears, and her fighting suit is orange with a green gem in the breast. She owns a large mallet that weighs 765 kilograms. She has an annoying manner of speech, constantly using phrase such as "Really, it is!" and "Y'know!" She houses Neito inside her body. Her special attack is "Super Extreme Tornado Attack. So There" and "Calamity Ripper". Whether or not she has real cat ears has yet to be confirmed, but they twitch when she is excited, and Tomokazu once imagined they were her "sensitive area".

Neneko is the only character from her series Yumeria to make it in the Triple Threat Crossover, Project X Zone. She's in as a solo unit.

Neneko with her battle uniform. 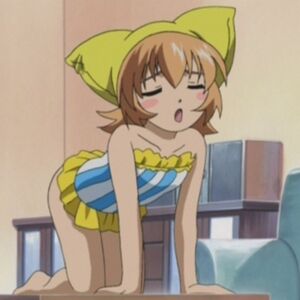 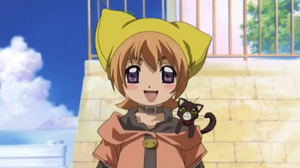 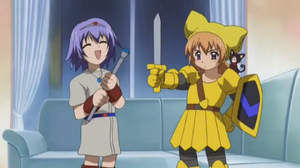