Start a Wiki
Nephenee (ネフェニー, Nepenee in the Japanese version) is a playable character who appears in Fire Emblem: Path of Radiance and Fire Emblem: Radiant Dawn.

Nephenee has rural origins, but prefers not to speak in order to hide her strong countryside accent — she only speaks to fellow residents of the countryside such as Brom and Heather, though Calill also tried to teach her how to shake her country roots. Nephenee is the oldest daughter of a large family, but left them behind in order to defend her Crimean homeland from the Daein invasion. She has 3 triplet brothers and two sisters. It has been shown, through supports with Devdan, that she is easily pressured and intimidated (especially by Devdan himself).

In Fire Emblem: Radiant Dawn, she and Brom quell a local rebellion that is incited by Ludveck's subordinates; she then travels to the Royal Palace in Melior to alert Elincia about the uprising. She fights alongside Ike during Part III, joining up with the merchant caravan on the way. After the war, she continues to live with her family in Melior and joins the fight when she is needed. A running gag in Radiant Dawn is that a female rogue named Heather seems to have affections for her. 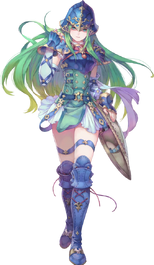 Portrait of Nephenee in Fire Emblem Heroes, illustrated by HACCAN
Add a photo to this gallery
Retrieved from "https://hero.fandom.com/wiki/Nephenee?oldid=1807015"
Community content is available under CC-BY-SA unless otherwise noted.